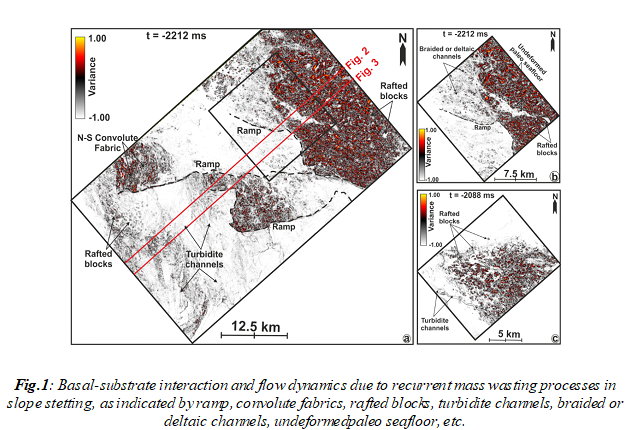 Deep down in the ocean, marine sediments move over the base of the ocean, shaping the probability of geohazards. Scientists have now used 3D seismic data to understand the interaction between bottom surface of marine sediments and the seafloor in the northern Taranaki basin offshore New Zealand. This can help apprehend the precursors of marine geohazards.

Marine geohazards take place when the seafloor is unstable and is not able to withstand the transport processes of marine sediments from landwards deep into the ocean bottom. In such a situation, placement of drilling rigs becomes hazardous due to instability of the seabed.

While understanding marine sediments' interaction during their flow over the seabed is crucial to detect triggers of marine hazards like landslides, associated morphological investigation is a very challenging task, and geophysical/seismic prospecting methods are essential for it.

Scientists from Wadia Institute of Himalayan Geology (WIHG), an autonomous institute under the Department of Science and Technology, Govt. of India, and scientists from Norway and Switzerland used high-resolution 3D seismic data to unravel geomorphology of recurrent cases of movement of soil, sand, regolith, and rock downslope like a solid in Taranaki basin off New Zealand.  This is technically called mass wasting of sediments.  The study led by Prof. KalachandSain was published in the journal ‘Basin Research’.

With the help of 3D seismic data, the study offers a unique approach to comprehend the recurrent mass wasting processes and also understand how the seabed interacts with the bottom surface of marine sediments. The geological period between 23.03 and 2.5 Million years ago called Neogene succession preserves vertical stacks of mass transport deposits (MTDs) from the Miocene to Pliocene --- different epochs that fall within the Neogene geological period. The Miocene (23.03 to 5.33 Mn years ago) is the first geological epoch of the Neogene period and towards the end of this epoch starts the Pliocene epoch (5.33 to 2.5 Mn years ago. The study shows that the mass transport deposits are characterized into blocky-MTDs consisting of moderate to high amplitude, variably deformed rafted blocks, and chaotic masses composed of slides and debris flow deposits indicating a disturbed marine environment.

The study will help understand different flow mechanisms associated with sediment movement over the seafloor. It will also shed light on several flow indicators that define the dynamics of the sediment mass movement or the dominant transport directions and mechanism of the mass flow. Understanding of these phenomena can help apprehend precursors of marine geohazards or the nature and physiography of the seafloor over which sediments can move.  According to WIHG team, similar geomorphological exercises can be extended to Indian and global marine sedimentary basins.