The discrepancy between the abundance of lithium as inferred from observations of stars and the theoretically predicted amount has intrigued astronomers for a long time.

Scientists from the Indian Institute of astrophysics have pinned down the mechanism behind the Lithium production in low mass red clump stars. Having found lithium excess to be common among the low mass red clump giants, they have now traced Helium (He)-flashing phase of the star's evolution as the site for high lithium production. This transition phase lasts for about 2 million, during which RGB giants with inert He-core at the centre become red clump giants of He-core burning.

Recently, a group of Astronomers at the Indian Institute of Astrophysics (IIA), Bengaluru, an autonomous institute of the Department of Science & Technology, Government of India, found observational evidence for Li enhancement during the helium-flashing phase of 2 million years, followed by a rapid decrease in Li abundances of such stars. According to their work, it seems Li excess in giants is a transient phenomenon.

The researchers led by Mr. Raghubar Singh and Prof. Eswar Reddy of IIA (including Simon Campbell of Monash Univ, Australia, Bharat Kumar of CAS, China, Matheu Vrard of Ohio State Univ. the USA) used asteroseismology (seismic study of stars using time-resolved photometry from Kepler space telescope) combined with spectroscopic abundances of elements to track the evolution of lithium in a sample of giant stars.  In addition to the evidence for Li production site, a first-of-its-kind correlation between the two independent observed quantities Li abundance and stellar oscillations (gravity mode period spacing) will serve to track the He-flashing phase of converting RGB giant of an inert, electron-degenerate He-core into a fully convective He-burning core by a series of core He-flashes, a theory developed in the 1960s. This work is published in the 'Astrophysical Journal Letters'. 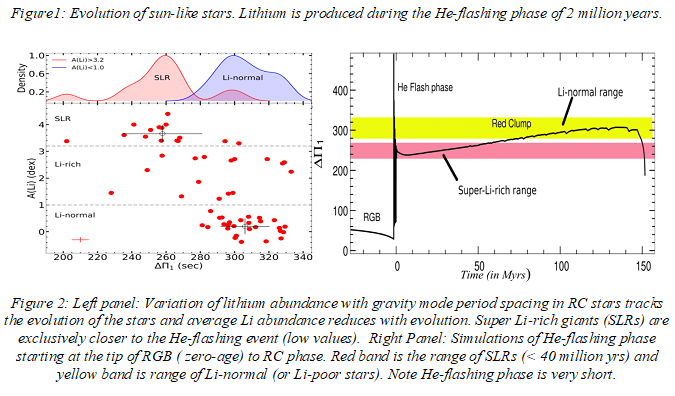 Lead author Mr. Raghubar Singh said, "We do not have much insight into the He-flash phase, let alone understanding of lithium production.  These new results will inspire further observations as well as theoretical models."

Talking about the importance of this result, Prof. Eswar Reddy added, "These results will be of great interest to a larger community of theoreticians and observers. This is because of lithium's broader implications to cosmological models, which predict Big Bang lithium abundance, which is a factor of four less than the presently observed values in the interstellar medium or very young stars, indicating lithium is increasing. Identification of production sites is important for accounting for Li enhancement in the Universe and provides excellent insights into the internal working of stars. "

For more details, Mr. Raghubar Singh (raghubar[dot]singh[at]iiap[dot]res[dot]in) can be contacted.