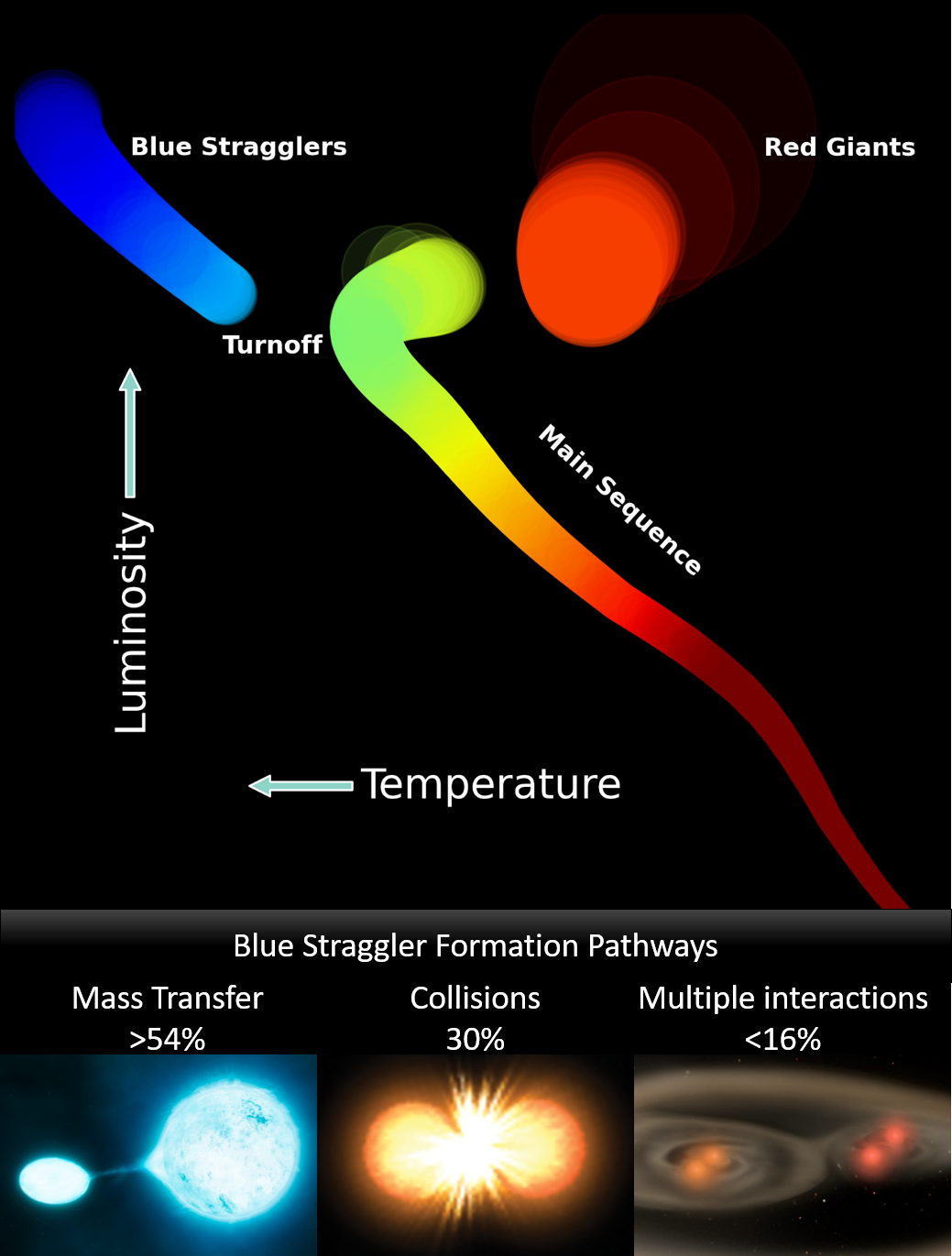 Blue stragglers, a class of stars on open or globular clusters that stand out as they are bigger and bluer than the rest of the stars, have intrigued scientists who have for long probed their origin.

A bunch of stars born at the same time from the same cloud form a star cluster. As time passes, each star evolves differently depending on its mass. The most massive and bright stars evolve and move off the main sequence creating a bend in their track, known as the turnoff. Stars above this bend or brighter and hotter stars are not expected in a cluster, as they leave the main sequence to become red giants. But in 1953, Allan Sandage found that some stars seem to be hotter than the turnoff of the parent cluster. Initially, these blue stars still straggling above the turnoff were not part of these clusters. However, later studies confirmed that these stars are indeed cluster members, and they were termed “Blue Stragglers”. The only probable way these stars can still be present in these clusters is if they have somehow acquired extra mass along the way while on the main sequence. Confirming the mechanisms of the mass gain required a study using a large sample of blue-straggler stars and estimates of the mass they have gained.

Vikrant Jadhav and his PhD supervisor, Annapurni Subramaniam from the Indian Institute of Astrophysics (IIA), utilised the Gaia telescope launched in 2013 by the European Space Agency with its excellent positional accuracy to select the blue stragglers in clusters and understand how many such stars there are, where they are and how they are formed.

They found that among the clusters they scanned, 228 have a total of 868 blue stragglers. This first-ever comprehensive analysis of blue stragglers is published in the journal Monthly Notices of the Royal Astronomical Society. It showed that these stars are primarily present in the older and massive star clusters. And due to their large mass, they are segregated towards the centre of the clusters. The researchers compared the mass of the blue stragglers to the mass of the turnoff stars (which are the most massive ‘normal’ stars in the cluster) and predicted the formation mechanisms.

The study will help improve understanding of these stellar systems to uncover exciting results in studies of large stellar populations, including galaxies. Following these findings, the researchers are conducting detailed analyses of individual blue stragglers in the catalogue to obtain their stellar properties. Furthermore, interesting clusters and blue stragglers identified in this study will be followed up with ultraviolet imaging with Ultra-Violet Imaging Telescope on AstroSat, India’s first dedicated space observatory, as well as the 3.6 m Devasthal Optical Telescope in Nainital.

For more details, Vikrant Jadhav (vikrant[dot]jadhav[at]iiap[dot]res[dot]in) can be contacted.