Sea-level will rise around the Lakshadweep Islands in the range between 0.4 mm/year to 0.9 mm/year, says a study conducted projecting different greenhouse gas scenarios. 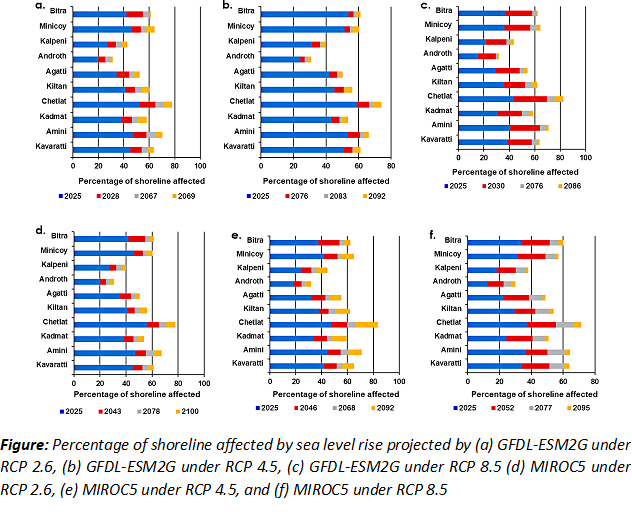 One of the major threats in the coming years is rising sea level and its significant impact on small islands and this is for the first time, that climate model projections were used to assess the potential areas of inundation over the archipelago of Lakshadweep Islands in the Arabian Sea.

A team of scientists including Aysha Jennath, Athira Krishnan, Saikat Kumar Paul, Prasad K. Bhaskaran jointly from the Department of Architecture & Regional Planning and Department of Ocean Engineering & Naval Architecture, IIT Kharagpur, with support from the Department of Science & Technology, Government of India under the Climate Change Programme (CCP), studied the Climate projections of sea level rise and associated coastal inundation in atoll islands, a ring-shaped coral reef or island.

The study estimated that smaller islands Chetlat and Amini are expected to have major land-loss. Projection mapping indicated that about 60%-70% of existing shoreline would experience land-loss in Amini and about 70%-80% in Chetlat. The present work highlights that, larger islands Minicoy and the capital Kavaratti are also vulnerable to sea-level rise, and expected to experience land-loss along 60% of the existing shoreline. Sea-level rise effects are seen to have the least impact on Androth Island under all emission scenarios.

The research that was published in the journal ‘Regional Studies in Marine Science, Elsevier recently showed that the coastal inundation could have wide socio-economic impact. According to the team, projected inundation due to sea-level rise can impact the islanders as residential areas are quite close to the present coastline. Also, the only airport in the archipelago is located at the southern tip of Agatti Island, and has a high likelihood of damage due to inundation from sea-level rise.

The authors have suggested that keeping in view the impacts from projected sea-level rise for Lakshadweep, it is necessary to have appropriate coastal protection measures and best-practices to formulate planning guidelines.

This study also opens up a new outlook and dimension on future research to assess the directional nature of wave energy, impact of storminess in the Arabian Sea region, islands that are exposed and sheltered and amenities such as potable water, sanitation and so on.

This noteworthy study has practical value and can be immensely useful to policy makers and decision making authorities for both short and long-term planning that benefit the population in Lakshadweep Islands.