Indian Scientists have identified that high-temperature drought conditions and low soil moisture content are favorable conditions for dry root rot (DRR), a disease that damages the roots or girdles the trunk in chickpea. This work will be useful for the development of resistant lines and better management strategies.

Dry root rot disease causes reduced vigour, dull green leaf colour, poor new growth, and twig dieback. If extensive root damage occurs, the leaves suddenly wilt and dry on the tree. The increasing global average temperature is leading to appearance of many new plant disease-causing pathogens at a rate hitherto unheard of, one of them being Macrophomina phaseolina, a soil-borne necrotrophic that causes root rot in chickpea. Currently, the central and southern states of India have been identified as the prime chickpea DRR hotspots with an overall 5 – 35% disease incidence.

Considering the destructive potential of the pathogen and a real possibility of an epidemic scenario in the near future, a team led by Dr. Mamta Sharma at ICRISAT embarked on a journey to unravel the science behind DRR in chickpea.

The team which closely monitored the disease identified that high temperatures ranging between 30 to 35 degrees, drought conditions, and less than 60% soil moisture content are favorable conditions for dry root rot (DRR).

This work supported and funded from the Department of Science & Technology, Govt. of India at the Center of Excellence in Climate Change at ICRISAT proved the close association of this disease with climatic factors. The results have been published in ‘Frontiers in Plant Science’.

The scientists explained that Macrophomina survives in a wide range of environmental conditions, even at extremes of temperature, soil pH, and moistures. In chickpea, DRR is highly prevalent during the flowering and podding stages coinciding with high temperature and drought conditions. They are now exploring ways to use the study for development of resistant lines and better management strategies.

The team is also trying to address the disease favourable conditions identified from a molecular perspective. In a recent breakthrough in gene expression studies, scientists have identified a few promising chickpea genes encoding for enzymes like chitinase and endochitinase, which can provide some degree of defense against DRR infection. 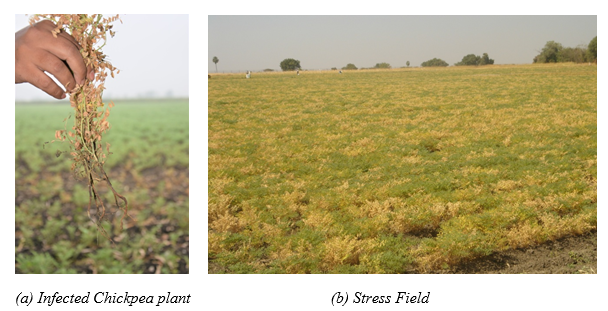 For more details, Dr. Mamta Sharma (mamta[dot]sharma[at]cgiar[dot]org) can be contacted.