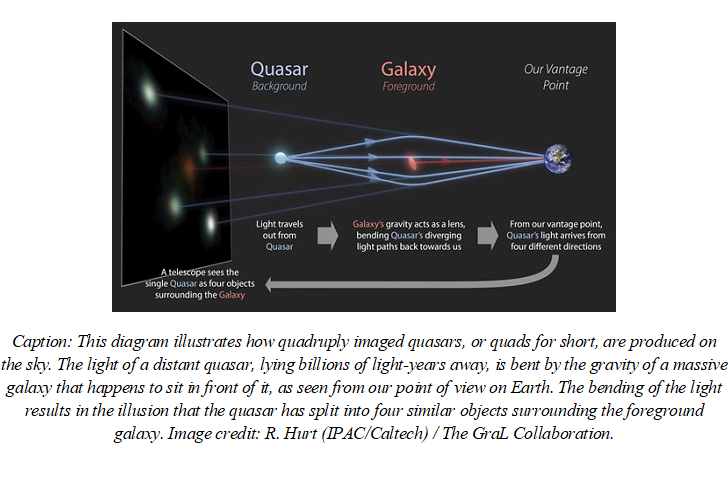 A group of astronomers have discovered a dozen quasars that have been warped by a naturally occurring cosmic "lens" and split into four similar images. This rare discovery increases the number of known quasars or quads by about 25 percent and can help determine the expansion rate of the universe and help address other mysteries.

Quasars are extremely luminous cores of distant galaxies that are powered by supermassive black holes. Quadruply imaged quasars are rare, and the first quadruple image was discovered in 1985. Over the past four decades, astronomers had found about fifty of these “quadruply imaged quasars” or quads for short, which occur when the gravity of a massive galaxy that happens to sit in front of a quasar splits its single image into four.

The study by Gaia Gravitational Lenses Working Group (GraL) of astronomers, which included scientists from Aryabhatta Research Institute of Observational Sciences (ARIES), Nainital, an autonomous institute of Department of Science and Technology, spanning only a year and a half, demonstrates the power of machine-learning to assist astronomers in their search for these cosmic jewels. It has been accepted for publication in ‘The Astrophysical Journal’.

"The quads are gold mines for all sorts of questions. They can help determine the expansion rate of the universe and help address other mysteries, such as dark matter and quasar 'central engines'," says Daniel Stern, lead author of the new study and a research scientist at the Jet Propulsion Laboratory USA.

In recent years, a discrepancy has emerged over the precise value of the universe's expansion rate, also known as Hubble-Lemaître’s constant. Two primary means can be used to determine this number: one relies on measurements of the distance and speed of objects in our local universe, and the other extrapolates the rate from models based on distant radiation left over from the birth of our universe called the cosmic microwave background. The problem is that the numbers do not match. The quasars lie in between the local and distant targets used for the previous calculations. The new quasar quads, which the team gave nicknames such as "Wolf's Paw" and "Dragon Kite," will help in future calculations of Hubble-Lemaître’s constant and may illuminate why the two primary measurements are not in alignment.

Humans and Machines Working Together

"Machine learning along with Augmented Intelligence (AI) tools was key to our study, but it is not meant to replace human decisions," explains Krone-Martins, Lecture at University of California. "We continuously train and update the models in an ongoing learning loop, such that humans and the human expertise are an essential part of the loop," said Krone-Martins, one of the authors of the study.

In the new study, the researchers used data from Wide-field Infrared Survey Explorer (WISE) to find likely quasars and then used the sharp resolution of Gaia to identify which of the WISE quasars were associated with possible quadruply imaged quasars. The researchers then applied machine-learning tools to pick out which candidates were most likely to multiply imaged sources and not just different stars sitting close to each other in the sky. Follow-up observations by Keck Observatory at U.S. state of Hawaii; Palomar Observatory at California, United States, the New Technology Telescope operated by the European Southern Observatory, and Gemini-South Observatory at Hawaii confirmed which of the objects were indeed quadruply imaged quasars lying billions of light-years away.

Priyanka Jalan, a Ph.D. student at Aryabhatta Research Institute of Observational Sciences (ARIES), Nainital, India, and Jean Surdej, Visiting astronomer at ARIES, have been very actively involved in the reduction and analysis of spectra of quasar components obtained from large ground-based telescopes.

“Many two lensed images of a single quasar have been found in the past, however, finding four lensed images is like searching for a cloverleaf in a large green field. It is thus appropriate to name those mirages “cosmic clover-leaves,” says Jean Surdej, member of GraL and Professor at the University of Liege, Belgium.

Further astrophysical studies of these new cosmic clover-leaves and other multiply imaged quasars with the 3.6m Devasthal Optical Telescope (DOT) and the upcoming 4m International Liquid Mirror Telescope (ILMT) facilities operated by ARIES should lead to an independent determination of the age of the Universe and its expansion rate.