Eminent Scientists, thought leaders, academicians, and industry experts of Central India highlighted the need for indigenization of technology, focus on traditional medicine system like AYUSH, the role of states in reaching out on rural issues, patent and IP rules for grassroot innovators at the 4th STIP post-draft consultation titled “Niti Charcha” 24th January 2021.

“COVID 19 has brought a new dimension to science, technology, and innovation (STI) in India where science has clearly emerged as a solution to the societal problems especially health bringing a new learning for the society and STI ecosystem. In this scenario, STIP, the first-ever policy formulation in which interstate consultation was undertaken, reached out to a wide range of stakeholders including 82 departments of the GOI,” said Dr. Akhilesh Gupta Adviser & Head STIP Secretariat, DST, who was leading the consultation.

Our Prime Minister gave a clarion call for ‘Atmanirbhar Bharat’ and science and technology can definitely help in achieving this. Last few years have witnessed emergence of disruptive and impactful technologies like AI, machine learning, quantum computing, and so on, and the entire world is adapting all these technologies. The new STIP focuses on the application of such technologies with the three verticals of industry, academia, and R&D institutions working together,” he added. 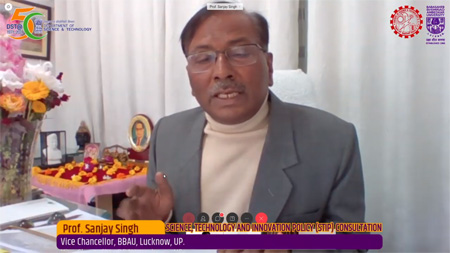 Professor Sanjay Singh, Vice-Chancellor, BBAU, suggested that the new Science, Technology and Innovation policy should be more focused on translational research work that can address and meet critical needs of the society, and it should focus on making science like a relay race where the outcomes of one stage are taken forward from one end to another to reach the final conclusion.

“The discussion and deliberation in today’s meeting will help us move forward in developing a fruitful STI policy,” he added. 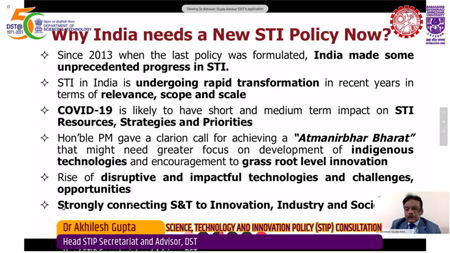 The panelists from a varied range of domains gave suggestions on a range of areas like priority areas of focus for research, development of industry and academia interface, bringing industry on board for taking technology to market from an early level, providing more autonomy to science institutions, inclusive science, addressing of issues like ageism in the new policy, systematic funding system to give due importance to equity and inclusion, introducing flexibility in work timings, upgrading Indian journals, creation of cross-disciplinary platforms of science, technology and engineering and so on.

The draft STIP was put together by STIP Secretariat led by Dr. Akhilesh Gupta with support available from the Office of Principal Scientific Adviser (PSA) to the Government of India (GoI) and the Department of Science & Technology (DST), GoI. The Secretariat carried out an extensive consultation process involving more than 43,000 stakeholders in India and abroad through over 300 rounds of discussions. The STIP was released for public consultation on 31st December 2020. Since then, a number of post-draft consultations have already been initiated to invite suggestions and recommendations. A series of consultations have been planned during coming weeks.