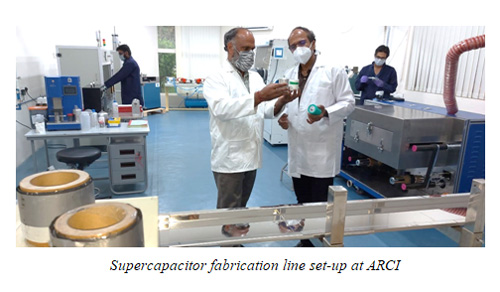 The first indigenous Petcoke-based 1200 F supercapacitor device has been developed with the help of high performance porous activated carbon electrodes, a move that would be commercially attractive for Electric Vehicles (EVs) industry.

In EVs, supercapacitors are useful in regenerative braking to recover the energy quickly during the application of brake, while in case of hybrid electric vehicles, they are used to improve the life and performance of Li-ion and lead-acid batteries. They are lithium free and safe and can deliver high power in minutes to enable fast charging of EV batteries, a critical requirement in fast-charging EV stations.

The indigenous supercapacitor device developed by a team of scientists and engineers at International Advanced Research Centre for Powder Metallurgy and New Materials (ARCI), an autonomous institute under the Department of Science & Technology (DST), Govt of India with  petroleum coke (petcoke) from Hindustan Petroleum Corporation Limited (HPCL) is at par with a world-class commercial supercapacitors in performance. 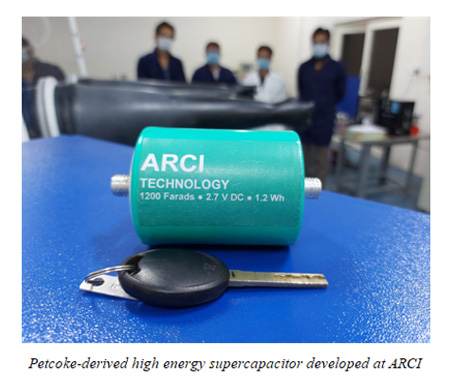 ARCI has embarked on development of several energy storage devices such as Li-ion batteries, Supercapacitors etc. under the Technical Research Centre (TRC) for “Alternative Energy Materials & Systems” established with funding from the Department of Science & Technology. Under the Supercapacitor development programme, the ARCI team used petroleum coke (petcoke) to develop graphene-like activated porous carbon by a low-cost chemical activation process and demonstrated its superior electrochemical properties in comparison with commercial supercapacitor grade carbon.  Petcoke, a by-product in oil refining process, is a rich carbon source material but contains significant amount of sulphur as impurity making it unsuitable as fuel in cement and steel industries due to the emission of hazardous Carbon dioxide (CO2) and Sulphur oxides. Its alternative use in supercapacitors can abate the emission problem while finding a high-value addition to it.

While India is emphasising on electric mobility and encouraging establishment of Li-ion battery plants, supercapacitor technology as a potential technology for EV applications has been realised off late. However, for the purpose, cylindrical supercapacitors with high capacitance (greater than 1000 F) in a single device and high energy density (more than 5Wh/kg) would be needed, and the new technology suits the purpose.

The ARCI team plans to scale-up the new technology with higher capacitance (<3000 F) to make modules from these supercapacitor devices for EV applications.

Typical performance characteristics are given in the table below: