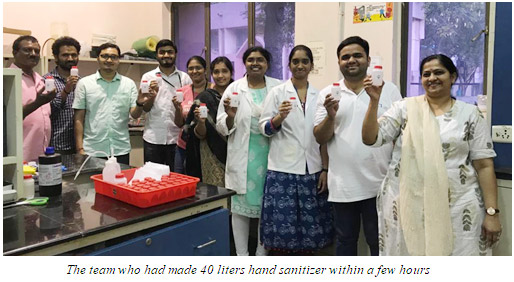 Considering the scarcity of hand sanitizers in the market, International Advanced Research Centre for Powder Metallurgy & New Materials (ARCI), Hyderabad, an autonomous R&D Centre of Department of Science and Technology (DST), Govt. of India, has produced hand sanitizer as per the WHO standards and distributed it among police personnel in Hyderabad, students, and staff of the institution. A team of scientists, students, and staff voluntarily came forward and produced about 40 liters of sanitizer.

The complete Idea of production, packaging, and distribution was completed in just 6 hours. Meanwhile, the order of lockdown was announced, and many of the students were leaving for their home towns. For their safety, a bottle of hand sanitizer and a face mask was given to most of them who were traveling. The sanitizer was also distributed to all the security staff, people working in the canteen, scientists, and also placed at common areas and entry gates. Team spirit, desire to contribute in disaster management, care, and concern about the ARCI family made this possible within a very short time. 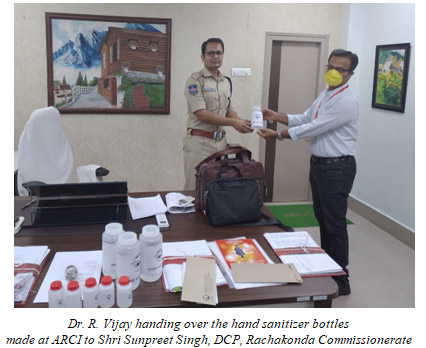 Subsequently, given the risk being taken by the police personnel who are working relentlessly to enforce the social distancing, ARCI Director Dr. G Padmanabham directed the team to increase the preparation of sanitizer so that it can be distributed among them. Accordingly, a substantial quantity of sanitizer was prepared and handed over to Shri Sunpreet Singh, DCP, Rachakonda Commissionerate by ARCI’s Senior Scientist Dr. R Vijay.

The Deputy Commissioner of Police, while appreciating the support extended by the scientists, requested for more quantity to provide for as many personnel as to possible. ARCI has made all arrangements to produce large quantities of sanitizer and provide it in easy to dispense 100 ml bottles, which the police personnel can easily carry with them in their pockets. Each bottle could last more than a week for each police personnel.

Dr. Padmanabham conveyed his appreciation to all the team members who contributed to this effort and encouraged them and other scientists to come up with more ideas to fight COVID 19.

In order to stop the spreading of dangerous corona virus, it is recommended that hands, staircase railings, door handles, “IRIS” biometric machine keys, common equipment, office vehicles are to be cleaned by sanitizer.