A recent study conducted by Indian Scientists has indicated that regions over Bay of Bengal, South China Sea, and South Indian Ocean can experience higher wave activity in the future, posing serious threat for coastal communities in the region.

Coastal communities are one of those most vulnerable to impacts of climate change and other environmental drivers due to their exposure to severe inundation and its frequency associated with extreme water levels in the nearshore regions. Impact resulting from coastal inundation can significantly affect the shoreline configuration, damage to infrastructure, saltwater intrusion into groundwater, destruction of crops, and affect the human population with a range of socio-economic consequences. Scientists around the world are trying the estimate the magnitude of this impact.

Analysis of the projections have indicated maximum extreme wind and wave activity over the South Indian Ocean region during June-July-August and September-October-November. Regions over the central Bay of Bengal show extreme wind activity from the end-century projections, signifying the likelihood for more extreme events. Extreme wave heights are seen to intensify by about 1 m over the South Indian Ocean during the June-July-August months. An increase of 0.4 m in maximum significant wave heights are projected over regions in the North Indian Ocean, northwest Arabian Sea, northeast Bay of Bengal, and South China Sea.

A team of scientists Athira Krishnan and Prasad K. Bhaskaran from the Department of Ocean Engineering & Naval Architecture, IIT Kharagpur, jointly with Prashant Kumar, Department of Applied Sciences, National Institute of Technology Delhi with the support from the Department of Science & Technology, Government of India under the Climate Change Programme (CCP), carried out this study which was published in the journal ‘Climate Dynamics’, Springer recently.

Findings from the study show that the projected change in wave heights are maximum for the South China Sea in RCP4.5, whereas the maximum rise is about 23% in RCP8.5 by the end of the end-century. Also, the projected change in winds and waves over the western tropical Indian Ocean is consistent with changes in sea-level pressure variations and warm ocean temperatures. Significant increment in sea surface temperature is projected over the Arabian Sea during December-January-February and June-July-August months ranging between 1.5 and 2.0º C, that is 0.5º C greater than Bay of Bengal. Projections show that regions over the Gulf of Oman and Persian Gulf can experience higher warming rates exceeding 2º C under RCP8.5 by the end-century.

The team elaborates that seasonal signatures in the extreme wind-wave patterns over the Indian Ocean directly correlate with the location of extreme wind activity. The end-century projections identified the hotspot locations of extreme wind activity over the central Bay of Bengal with magnitudes reaching 13-15 m/s, demarcating the likelihood of more extreme events in this region. Projected changes during the mid-and end-century showed a dipole behavior or seesaw effect having two distinct dipoles over the western and eastern regions in the tropical Indian Ocean belt. Regions in the northern, central, and eastern sectors of the Bay of Bengal, the southern part of the South China Sea, northern and western regions of Arabian Sea, and eastern tropical Indian Ocean can witness changes ranging from 1-1.25 m by the end-century under the extreme RCP forcing scenario.

The new findings from this study are expected to augment more advanced research on extreme wind-wave activity for the North Indian Ocean region and also provide the scope for a detailed investigation on the possible linkages and teleconnection with climate indices in a changing climate. 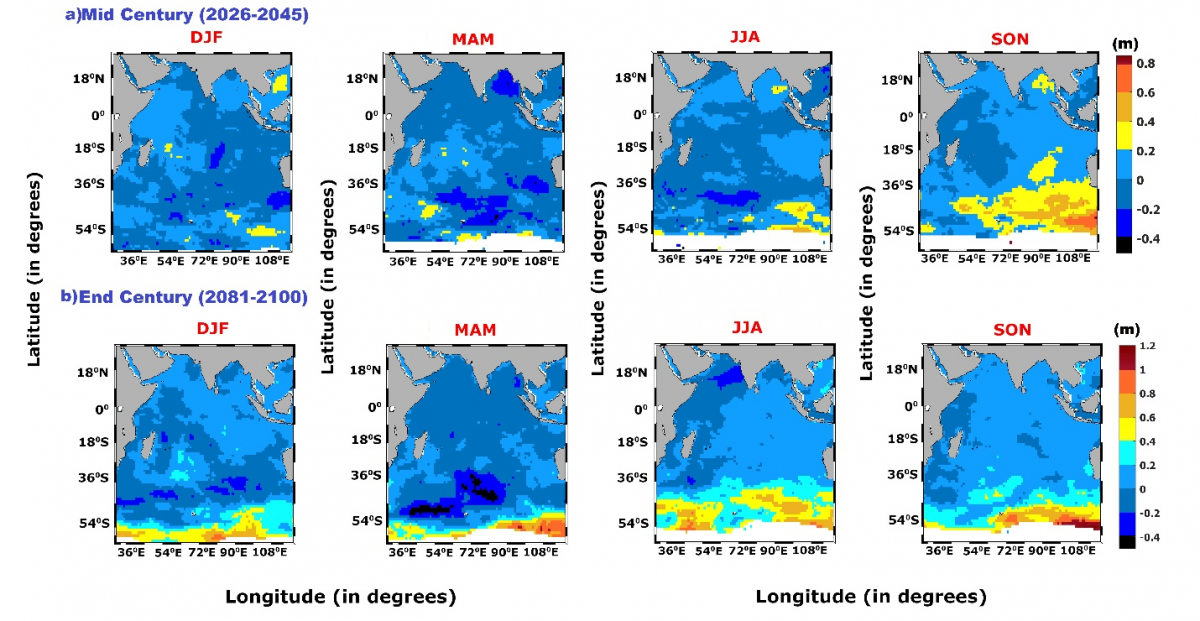 Figure: Projected difference in the climatological patterns of extreme significant wave height between RCP 8.5 and RCP 4.5 scenarios for the mid- and end-century