Scientists have estimated how the Sun has rotated over a century from data extracted from old films and photographs that have been digitized. This estimation would help study magnetic field generated in the interior of the Sun, which causes sunspots and results in extreme situations like the historical mini-ice age on Earth (absence of sunspots). It could also help predict solar cycles and their variations in the future.

The Sun rotates more quickly at its equator than at its poles. Over time, the Sun's differential rotation rates cause its magnetic field to become twisted and tangled. The tangles in the magnetic field lines can produce strong localized magnetic fields. When the Sun's magnetic field gets twisted, there are lots of sunspots. The sunspots which form at the surface with an 11-year periodicity are the only route to probe the solar dynamo or solar magnetism inside the Sun and hence measure the variation in solar rotation.

Researchers led by Mr. Bibhuti Kumar Jha, a Ph.D. student from the Aryabhatta Research Institute of Observational Sciences (ARIES), an autonomous institute under Department of Science and Technology (DST), Govt. of India, along with the collaborators from Max Planck Institute for Solar System Research, Goettingen, Germany and Southwest Research Institute, Boulder, USA have studied the solar rotation by tracing sun spots from century-old digitalized films and photographs. The old films and photographs were taken at the Kodaikanal Solar Observatory (KoSO) of Indian Institute of Astrophysics (IIA), an autonomous institute of DST, and have now been digitised. 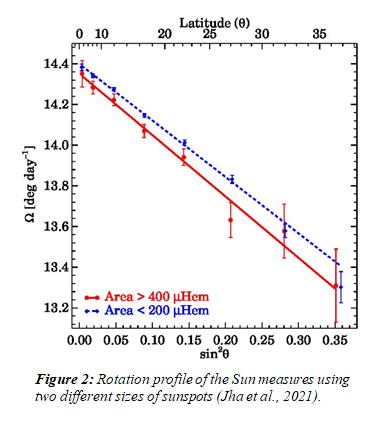 The team compared the consistent digitized data with manual data of rotation taken earlier and said that they have been able to differentiate the behaviors of the bigger and smaller solar spots for the first time.

Such digitized data and differentiation of bigger and smaller sun spots can improve understanding of solar magnetism and sun spots, paving the path towards predicting solar cycles in the future.