Researchers have developed a technology to produce energy-efficient walling materials using construction and demolition (C&D) waste and alkali-activated binders. These are called low-C bricks, do not require high-temperature firing, and avoid the use of high-energy materials such as Portland cement. The technology will also solve the disposal problems associated with C&D waste mitigation.

Conventionally, building envelopes consist of masonry walls built with burnt clay bricks, concrete blocks, hollow clay blocks, fly ash bricks, light-weight blocks and so on. Such materials consume energy during their production, leading to carbon emission (high embodied carbon) and consume mined raw material resources which leads to unsustainable constructions. The masonry units are manufactured either through the process of firing or using high energy/embodied carbon binders such as Portland cement. The annual consumption of bricks and blocks in India is about 900 million tonnes. Besides, the construction industry generates vast amounts (70 – 100 million tonnes per annum) of construction and demolition waste (CDW). In order to promote sustainable construction, two important issues need to be addressed while manufacturing the masonry units – conserving mined raw material resources and emission reduction. 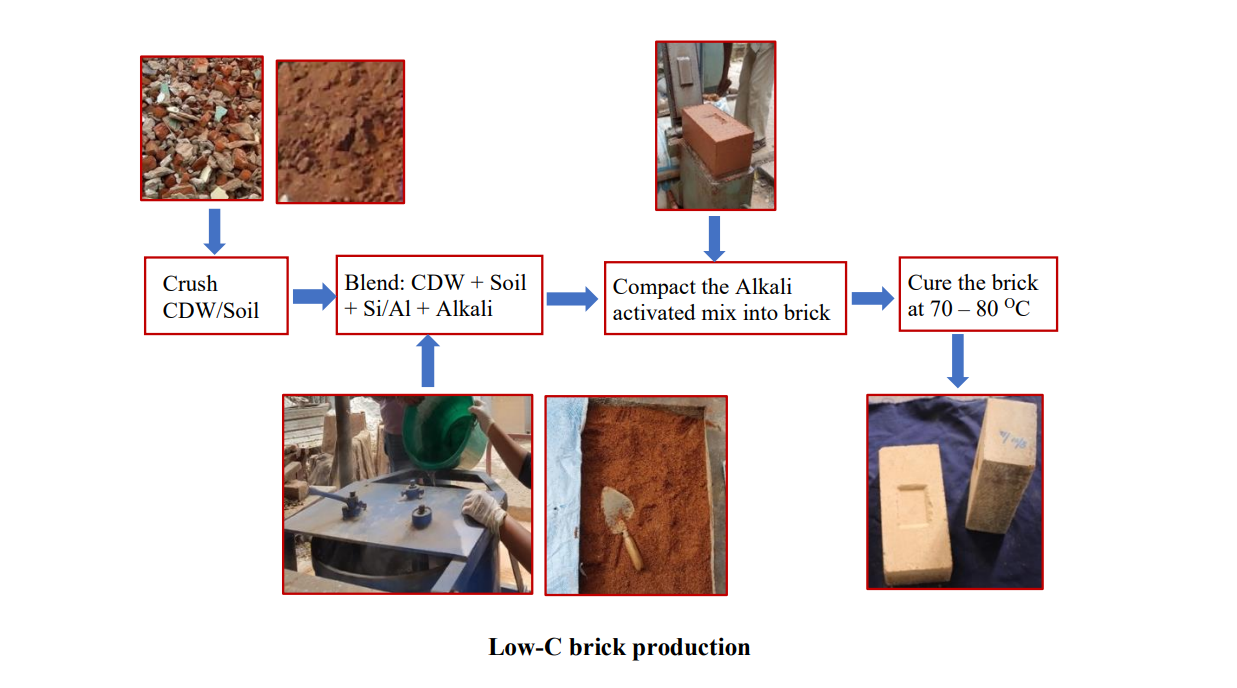 Moving towards this target, scientists of the Indian Institute of Science (IISc) developed a technology for producing alkali-activated bricks/blocks by utilising fly ash and furnace slag. The team of researchers developed low embodied carbon bricks from CDW waste through an alkali activation process using fly ash and ground slag and characterising the thermal, structural, and durability characteristics of Low-C bricks and their masonry. After ascertaining the Physico-chemical and compaction characteristics of the CDW, the optimum mix ratios of the materials were obtained, and then the production process was evolved to produce low-C bricks. Based on the optimum binder proportions, the compressed bricks were manufactured. The bricks were examined for engineering characteristics.

The major beneficiary of this development undertaken by IISc Bangalore with funding from the Department of Science and Technology, Govt. of India under Clean Energy Research Initiative, is the construction industry in general and the building sector in particular. This technology will also mitigate the disposal problems associated with the C&D wastes.

“A start-up has been registered which will be functional within 6-9 months to manufacture low-C bricks and blocks with IISc technical help. The start-up unit will act as a technology dissemination unit through training, capacity building, and providing technical know-how for establishing such commercial units across India,” remarked Prof. B V Venkatarama Reddy, IISc Bangalore.