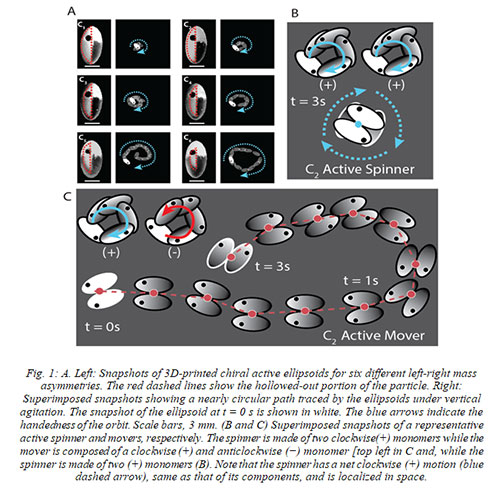 Can particles which refuse to interact with each other form condensed phases like solids and liquids be brought together? How do particles form these structures without attraction when left on their own? Scientists have now found a clue to determine how self-assembled structures can be made using a strange class of particles that do not interact and have non-superimposable mirror images (chiral).

Molecular chirality is encoded in the static structure of building units of particles. It is well known that it results in interactions that are stereoselective. However, in many systems, chirality can be associated with how the particles move.

Whether such chiral activity can introduce stereoselective interactions between particles is still unknown to scientists.  By investigating the role of chiral activity, a group of scientists have for the first time shown that objects can self-recognize even when their shape is not chiral.  Further, they report spontaneous dimerization into two types of dimers- ‘movers’ and ‘spinners’.

Scientists from Jawaharlal Nehru Centre for Advanced Scientific Research Bangalore, an autonomous institute of the Department of Science & Technology, Government of India and the Indian Institute of Science Bangalore, tuned the nature of the chiral activity of millimetre-sized rice-shaped grains with the help of 3D printing.

This is the first experimental study to uncover that even when objects are not chiral in shape, chirality inactivity alone can bring about selectivity and recognition between the interacting particles. This work published in the journal ‘Science Advances’ recently opens new pathways to self-assemble matter by imparting the constituents with chiral activity.

The scientists said that by exploiting 3D printing to design chiral active matter, they can systematically encode different extents of chiral activity and explore its consequences on the emergent dynamical behaviour.

Chirality-mediated selective interactions are of utmost importance in asymmetric catalysis, supramolecular polymerization, medicinal drug designing, and separation where self-recognition, sorting, and discrimination of molecules are required.