Indian Scientists have developed an environmental-friendly process, which can provide excellent corrosion resistance to the high-strength aluminium (Al) alloys extensively used in aerospace, textile, and automotive applications. It involves an electrochemical method for the production of an oxide film on the metallic substrate.

High-strength aluminium (Al) alloys are extensively used in aerospace, textile, and automotive applications owing to their low density and high specific strength. Aerospace components made out of Al alloys include landing gear, wing spar, which is the main structural part of the wing, fuselage (main body of an aircraft), aircraft skins or outer surface and pressure cabins. These parts often need resistance against wear, corrosion damages, and enhanced fatigue life. The widely used technique for Al alloys to improve corrosion resistance called hard anodizing (HA) process, is an electrolyte-based coating deposition. It involves sulphuric/oxalic based electrolytes, which emits not only toxic fumes but are also hazardous to handle during processing.

In order to cater to the growing demand for cleaner industrial processes, an environmental-friendly process called micro-arc oxidation (MAO) has been developed at International Advanced Research Centre for Powder Metallurgy and New Materials (ARCI), an autonomous R&D Centre of the Department of Science and Technology, Govt. of India. The process which involves an alkaline electrolyte is capable of providing better wear and corrosion resistance compared to the HA process.

MAO is a high-voltage driven anodic-oxidation process, which through an electrochemical method,  produces an oxide film on a metallic substrates. ARCI team has further designed and developed a duplex treatment of shot peening (process used to modify the mechanical properties of metals and alloys) followed by MAO coating deposition. Systematic investigations conducted at ARCI have shown that the duplex treatment has led to the remarkable enhancement in aerospace Al alloys' fatigue life while retaining the outstanding corrosion and wear resistance of MAO coating. The efficacy of duplex treatment has been validated for different Al alloys and extended to impart superior corrosion fatigue life. This work has been recently published in the ‘International Journal of Fatigue’. 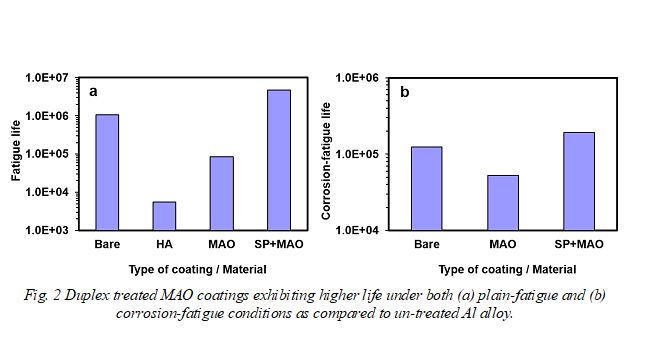 The MAO process developed at ARCI has been patented in India and abroad. The team at ARCI has mastered the design and development of MAO systems of a lab (20 kVA), bench (75 kVA), and industrial (up to 500 kVA) scales to enable translating the technology from the R&D level to commercial production. As a logical extension, the custom-built technology systems were transferred to various industries and academic institutes in India. To cater to the aerospace segment, extensive research has been carried out at ARCI, and the high-cycle fatigue life of aerospace Al alloys under plain and simultaneous corrosion environments could be significantly improved.

The process with necessary modifications can be used for wear, corrosion, thermal, and fatigue and corrosion-fatigue life enhancement of a variety of components made out of Al, Mg, Ti, Zr, and their alloys.