A new study will help accurate estimation of black carbon over the Himalaya, a key contributor to global warming & improve weather & climate predictions 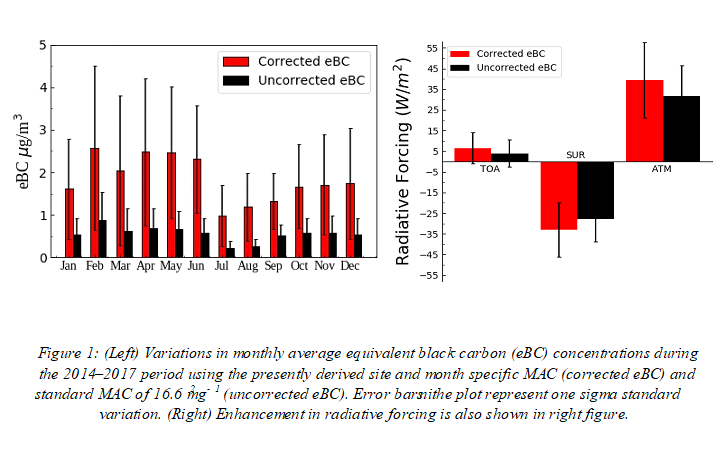 Accurate estimation of black carbon (BC), the second most important global warming pollutant after CO­2, will now be possible using optical instruments in the Himalayan region. Thanks to a parameter called the mass absorption cross-section (MAC) specific to the Himalayan region that scientists have estimated. It will also improve the performance of numerical weather prediction and climate models.

Scientists at the Aryabhatta Research Institute of Observational Sciences (ARIES), an autonomous institute under the Department of Science & Technology (DST), Govt. of India, in collaboration with scientists from the University of Delhi, IIT Kanpur and Space Physics Laboratory, ISRO have made extensive observations of black carbon and elemental carbon and estimated monthly and wavelength-dependent values of MAC over the central Himalayan region for the first time.

The researchers have derived the values of MAC – an essential parameter which is used for obtaining Black Carbon mass concentrations. In a study published in ‘Asia-Pacific Journal of Atmospheric Sciences’ led by Priyanka Srivastava, along with her Ph.D. supervisor Dr. Manish Naja, have calculated the annual mean value of MAC (5.03 ± 0.03 m2 g− 1 at 880 nm) and found it to be significantly lower than the constant value (16.6 m2 g− 1 at 880 nm) used earlier. These lower values are a result of transport of processed (not fresh) air pollution emissions at this otherwise clean site. The study also revealed that these estimated MAC values show significant seasonal variation, spanning over a range of 3.7 to 6.6 m2 g− 1 at 880 nm. It is found that these changes are caused by the seasonal variability of biomass burning, air mass variation, and meteorological parameters.

According to the ARIES team, these higher resolutions multi-wavelength and long-term observations used in calculating MAC will help improve the performance of numerical weather prediction and climate models in estimating the warming effects caused by BC emissions. The precise knowledge on BC at various wavelengths will help in source apportionment studies done to constrain the sources of BC emissions. This can thus serve as important information to form the mitigation policies.