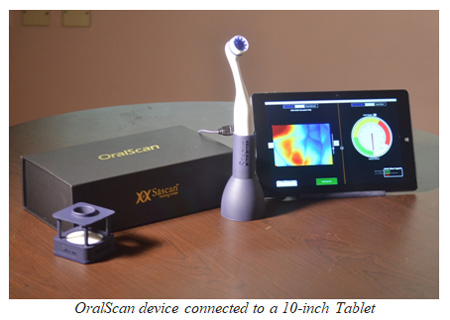 “Kerala government plans to compile a registry of cancer patients in the state as part of efforts to codify its various initiatives against the deadly disease. These kind of innovations have come forward to brace this change and also appreciating the efforts of Business incubator TIMED- SCTIMST at this time,” Smt. Shailaja said.

Oral Scan is a Make- in- India initiative with seed funding from the scheme National Initiative for Developing and Harnessing Innovations (NIDHI) of DST. Oral scan was designed and developed entirely in India and supported by the Biotechnology ignition grant of Biotechnology Industry Research Assistance Council (BIRAC), INVENT (DST), and Kerala Start-Up Mission. The company recently received investment from Unicorn India Ventures. 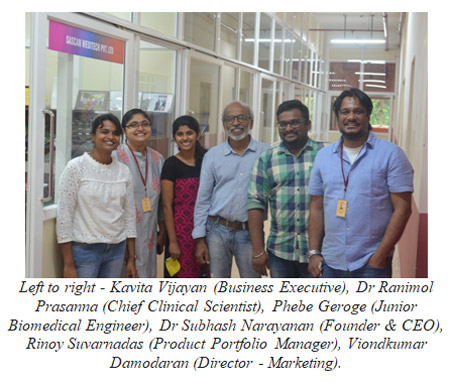 According to Dr. Subhash Narayanan, CEO of Sascan, oral cancer is a growing concern in India, with more than 80,000 fresh cases reported each year. The disease has a high mortality rate because of the delay in detection. Current practice relies on oral examinations using torchlight to detect early-stage cancers of the oral cavity. Studies have demonstrated that this screening technique is not very reliable and often facilitates the detection of oral potentially malignant lesions (OPMLs) that go undetected in the early stages.

Even experienced clinicians find it difficult to locate the optimal site for a biopsy based on conventional oral examination. This leads to multiple biopsies, increased expenditure, and false-negative reports, which can delay diagnosis and outcome. In this context the handheld imaging device developed by Sascan for screening, detection of OPMLs, and biopsy guidance becomes relevant. A proprietary software assists the surgeon in taking a biopsy from the most appropriate site, which is likely to confirm the diagnosis of malignancy. This will avoid multiple biopsies and false negative reports. The device will be marketed at a price of Rs 5.9 Lakhs. This will be a one- time investment for hospitals and laboratories without any additional costs of consumables.

“This device is expected to have good demand in General Dentistry, Oral Medicine, Oral/Maxillofacial Pathology and surgery,” said Shri Balram, Engineer, Sree Chitra and CEO of the incubator of Sree Chitra.