The already receding Gangotri glacier seems to have more bad news in store.  Black carbon concentration in the region increases by 400 times during summer, according to a study. The study suggests that agricultural burning and forest fire as the reason behind this seasonal increase. This can trigger glacial melt because of the light-absorbing nature of black carbon.

Scientists from Wadia Institute of Himalayan Geology, (WIHG) an autonomous institution under Department of Science & Technology in a study conducted at Chirbasa station near Gangotri Glacier, for the Year 2016, found that black carbon (BC) concentration in this region has changed from 0.01μgm−3 in winter to 4.62μgm−3 during summer.

It was revealed by investigating the occasional high values of black carbon extricated, that the seasonal cycle of increase was significantly influenced by the emissions resulting from agriculture burning (in western part of the country), forest fires (along the Himalayan slopes) in summer, and to some extent by the contribution from long-range transport of pollutants in winter, depending the prevailing meteorological condition.

The research led by Dr. P.S. Negi from WIHG was published in the scientific journal Atmospheric Environment.

The Equivalent Black Carbon (EBC) aerosols contribute significantly towards global warming due to its light-absorbing nature. Their presence in the eco-sensitive zone, such as the Himalayan glacier valleys, is a matter of serious concern and needs to be meticulously monitored. However, baseline data on BC is rarely available from most of the glaciated Himalayan region.
For the first time, the team of Scientists from WIHG carried out measurements on ambient EBC mass concentration at a high altitude site Chirbasa (3600 m), near Gangotri Glacier in the Indian Himalaya, during the year 2016. The monthly mean concentration of EBC was found to be minimum in August and maximum in the month of May. The observed seasonal mean concentrations of EBC indicated a pristine glacial source and absence of EBC sources in the locality. 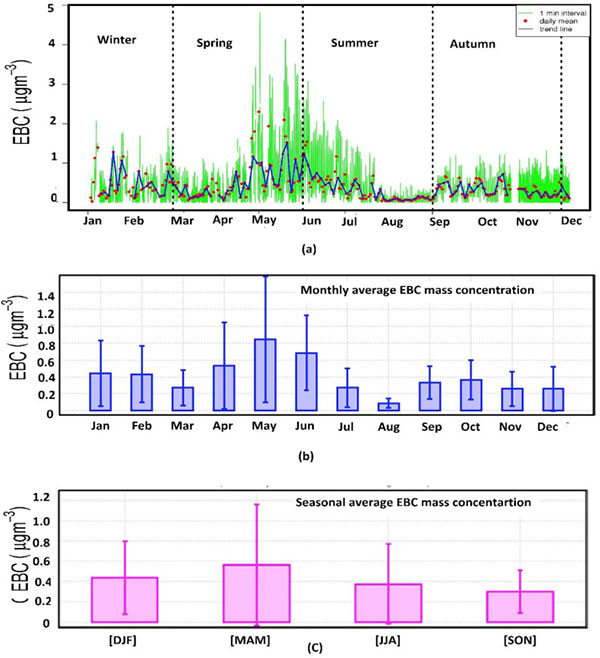