Pollen grains fossilized 2700 years ago and buried deep in the wetland at Upshi in Ladakh located by the side of Miru River-- a tributary of Indus at Gaya in north western Himalaya have given indications about how the climate in the Himalayas have evolved over the years.

The reconstruction of vegetation and climatic records of Ladakh for part 2700 years by Wadia Institute of Himalayan Geology (WIHG) has identified three phases – a warm phase between 2646 and 1860 years before the present date, followed by a cold and dry phase between 1860 and 1154 years ago. From 1154 to 293 ago, the climatic condition reverted to warm and wet. These were, however, much before the present era of human-made climate change.

The study published in the journal The Holocene will be crucial in gauging future Indian summer monsoon (ISM) variability in the context of concurrent global warming. Predicting the future course of ISM variability with mathematical models can still be quite challenging as there are lots of uncertainty.

These climatic spells are correlatable across the Himalaya and its foreland (the Ganga Plain). The warm climatic phases appear to be overprinted onto the phases of well-documented Northern Hemisphere temperature anomaly, and solar insolation, and hence concurrent warming may have led to a warmer and wetter phase in the high-altitude Ladakh region. This scenario may have buttressed societal activities in the region, revealing cultural changes in response to change in the climate.

“As Ladakh is bounded in the North by Tibetan Plateau influenced by westerlies and in the south by Higher Himalaya washed by the monsoon. So it is a unique location for studying the interaction of westerlies and monsoon. It was not easy to get such sediment deposits, but the uniqueness of the location makes it worthwhile,” mentioned one of the researchers from WIHG.

Organic rich sediment deposits archive vegetal matter in a sequence reflecting variation in past climate. The location from which the fossilized pollens were found is a peaty deposit rich in organic matter. The whole surface is covered by wild grasses below which lies a layered mixture of fine sediment and organic matter. These thick overlying grasses mask the deposit from the atmosphere inhibiting oxidation. This slowly growing deposit act as an efficient carbon sink and now served as an excellent archive of past climate as pollens, chemical, and isotopic signatures, etc. with no depositional gap.

The reconstructed record was supported by multi proxies such as environmental magnetism, elemental, and isotopic record of carbon and nitrogen. It was also compared with records of solar insolation. The scientists used the 14C record from ice cores of Greenland as a proxy of past solar insolation. Solar insolation increases with the increase in the frequency of solar magnetic storms.

The paleoclimatic data (climate distinctive to a past geological age) of such a timeframe can give a reference point on how the present condition came to be and downsize the uncertainty of the direction where the future is heading. The paleodata will be highly relevant to the present, and hence if made accessible to modelers, it can be used to reduce uncertainties on how different forcing mechanisms will operate and at what rate. 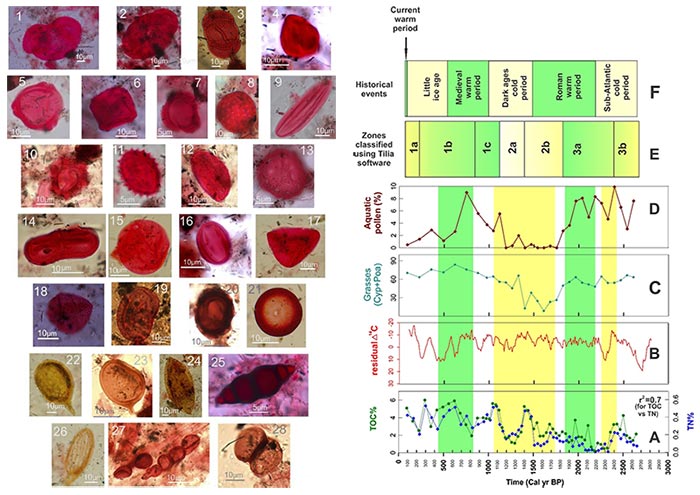