The highest energy afterglow detected in space so far seems to be a rebel. The emission from the most notable Gamma Ray Burst (GRB) explosion so far traced -- the afterglow from a galaxy 4.5 billion light years away was found to be complex in nature and did not follow the evolution expected in standard afterglow models. The detection of high energy photons (TeV Photons) from this GRB provides new insights and important clues to unravel the underlying physical processes at work which result in such explosions. 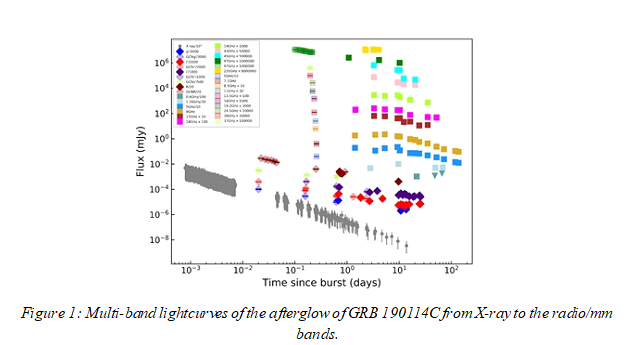 The GRB with ultra-high energy photons called GRB 190114C was detected for the first time on 14-January-2019. This discovery was reported in Nature by the Major Atmospheric Gamma Imaging Cherenkov Telescopes (MAGIC) collaboration.

As usual, the GRB lasted for a brief period, followed by an initial bright flash in high energies known as the ‘prompt emission’. A less luminous but long-lasting counterpart known as the ‘afterglow’ was detected after the prompt emission and offered scientists the chance to probe the GRBs.

Dr. Kuntal Misra from Aryabhatta Research Institute of Observational Sciences (ARIES), Nainital, an autonomous institute of the Department of Science & Technology, along with significant contributions from national and international collaborators, carried out observations of the afterglow from GRB 190114C spanning over nearly 140 days after the burst. The paper has been published in Monthly Notices of the Royal Astronomical Society (MNRAS).

Detailed modelling of the afterglow using multi-band data indicates that the parameters describing the fraction of energy in electron population and magnetic field are evolving with time and not constant as generally seen in GRBs. The scientists suggested that the evolution of these parameters, at early times, may play a role in producing the bright TeV emission 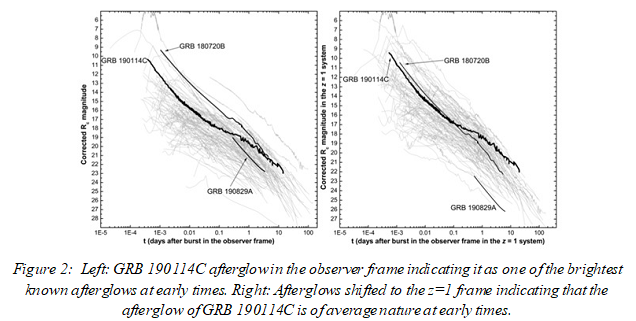