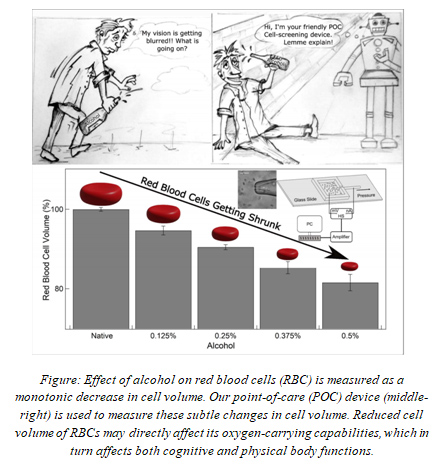 Scientists have custom-made a platform to detect the effect of prolonged alcohol exposure on Red Blood Cells (RBC) through high-resolution measurements of their size. The high-resolution platform that shows the reduction in size of RBCs on alcohol exposure can be tuned for a point-of-care screening of multiple conditions that alter the size and count of RBCs in blood.

Although it is known that alcohol affects RBCs, the exact physiological changes are very subtle and difficult to measure. In order to overcome this challenge, scientists from Raman Research Institute (RRI), an autonomous institution funded by the Department of Science & Technology (DST), Government of India led by Professor Gautam Soni, have developed custom-made electro-fluidic platform that can detect the change by measuring the cell size in enhanced resolution.

The device made in RRI relies on the resistive pulse sensing principle. The team first developed techniques for making tiny micron (1/1000th of a millimetre) sized holes or micro-pores at the tip of a glass capillary with careful fabrication, flame polishing, and image verification. Cells passing through the pore created very tiny electrical pulses, which give direct and most sensitive information of cell count and volume. These results may also be used to explain the lack of oxygen-carrying capability of RBC under alcohol exposure leading to blurred vision, muscular incoordination, and altered mental states from alcohol abuse. This research work, recently published in ACS Sensors journal of the American Chemical Society, was carried out by researchers Saurabh Kaushik, Manohara M., and K.D Murugan under the guidance of Dr. Soni and Dr. V. Sundaramurthy from NCBS Bangalore.

“Our lab had been working on building nanofluidic single-molecule detectors for the last few years. We found that some of the ideas used in the nanofluidic field may also be used in microfluidics in general and cell-biology in particular. We were pleasantly surprised with the reproducibility and resolution of our devices,” said Professor Soni. Cell volume changes are an important biomarker for multiple diseases, especially blood-related conditions. Accurate measurement of volume changes of RBCs has applications in detection as well as mechanistic studies of diseases such as sickle cell anemia and malaria. Similarly, small volume changes of RBCs could also be indicators of malnutrition states in a cell. With this work, the RRI team envisages that the high-resolution platform can be tuned for a point-of-care screening of several other blood-related conditions.

For more details, Professor Gautam Soni (gvsoni[at]rri[dot]res[dot]in) can be contacted.