The abundances of heavy metals in oldest metal-poor stars that are born from the ejecta of first stars has intrigued astronomers for long as already known processes of reaction of chemical elements by nuclear fusion within stars (nucleosynthesis) could not explain it. Scientists have now found a clue to this abundance in a nucleosythesis process called the i-process. 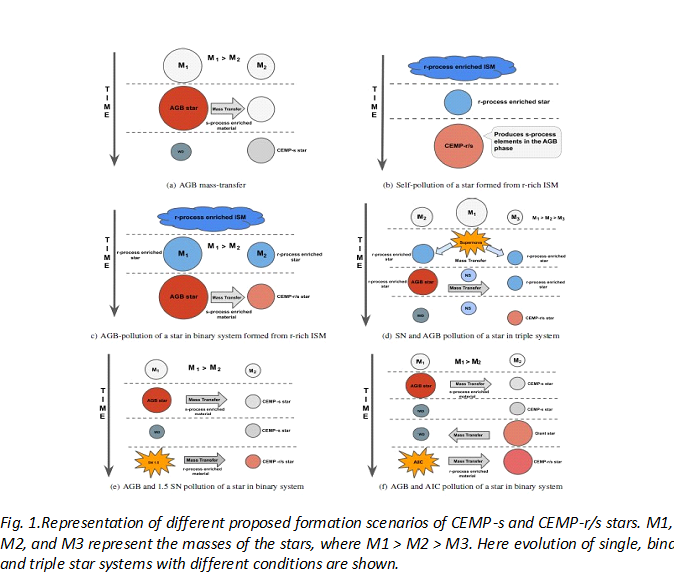 Metal-poor stars that show enhancement of carbon, technically called Carbon Enhanced Metal Poor (CEMP) stars which were formed from the ejected material of the first stars that formed after the Big Bang, carry the chemical imprints of early Galactic chemical evolution. Probing into the formation of these metal-poor stars that exhibit enhancement in carbon as well as the specified heavy elements can help trace the origin and evolution of the elements in the Universe.

Scientists earlier found that heavier elements are produced mainly by two processes of nucleosynthesis– slow and rapid neutron-capture processes called s and r processes respectively. The s-process elements were thought to be produced in low and intermediate mass stars towards a final stage of stellar evolution. The proposed sites of the r- process are exotic events such as supernovae and neutron star mergers. The CEMP stars showing enhancements of s-process and r-process elements are known as CEMP-s and CEMP-r stars respectively. However, there is an another surprising subclass of CEMP stars, known as CEMP-r/s stars which exhibit enhancement of both s- and r-process elements the production process of which had remained a puzzle.

A group of scientists comprising of Prof. Aruna Goswami, from the Indian Institute of Astrophysics (IIA), an autonomous institute under the Department of Science & Technology, Govt. of India, her doctoral student Partha Pratim Goswami and Master’s student Rajeev S. Rathour has achieved a significant advancement in unravelling this puzzle in a recent study published by in the journal, ‘Astronomy & Astrophysics (A&A). In this paper, they have found that an intermediate process which they called i-process operating at neutron densities intermediate between those for s-process and r-process is responsible for the peculiar abundance pattern of CEMP-r/s stars. They have also put forward a new stellar classification criteria based on the abundances of barium, lanthanum and europium to distinguish between the CEMP-s and CEMP-r/s stars.

Partha Pratim Goswami said “This scheme of classification is based on the abundance ratios of three very crucial neutron-capture elements barium, lanthanum and europium and can be effectively used to distinguish the CEMP-s and CEMP-r/s stars”.