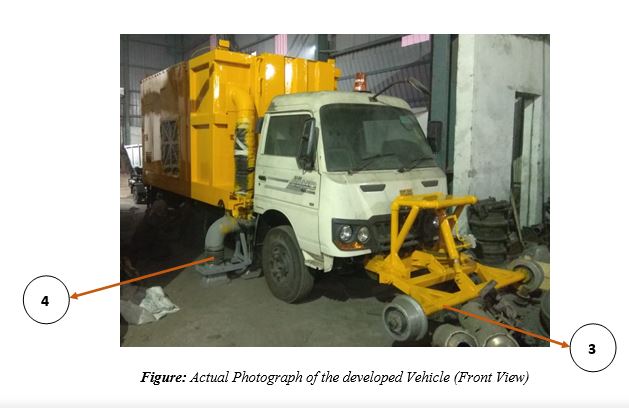 Despite the ban on manual scavenging since 1993 in our country, men and women are seen removing excreta on the tracks with brooms and metal plates. Once the garbage is picked up from the tracks, night soil, excessive dirt, oil, and other foreign materials is ineffectively cleaned with high-pressure water jets.

Dr. Sharad K. Pradhan, Associate Professor, Department of Mechanical Engineering, National Institute of   Technical Teachers’ Training and Research (NITTTR), Bhopal, has developed a Multifunctional Railway Track Scavenging Vehicle with support from the Advanced Manufacturing Technologies programme of the Department of Science & Technology (DST), Government of India aligned with the ‘Make in India’ initiative. A national patent has been published for this technology.

Once the dry and wet suction is over, the water nozzles start spraying water jets to clear off any human waste or semi-solid garbage present on the track floor. Another set of nozzles spray disinfectants on the track to get rid of flies, rats, and other insects. Water jets completely remove the human waste and other wet garbage from the interrail space zone. Both dry and wet garbage are collected in different tanks, and once filled, it can be decanted at appropriate local municipal garbage collection point. A joystick-controlled telescoping suction pipe is fitted to clear the slurry from the trench parallel to the track. The telescoping suction pipe can easily be placed at appropriate position in the side trench to suck the sewage slurry.

As this is a rail cum road vehicle, it can be used as a material/ garbage transport vehicle from track to road by Indian railways. It can also be used as maintenance/inspection vehicle and disinfectant spraying vehicle by Indian railways. In nonscavenging mode, it can also be used as a transportation and inspection vehicle by Indian Railways. After successful development and testing, the developed vehicle can be adopted by Indian railways as a scavenging vehicle for all of its stations. The developed vehicle having low maintenance cost, compact size, reverse and forward movement, and continuous and intermittent action, make it better and effective as compared to existing research endeavours.

After pilot testing, the manufacturing industry can be associated along with Dr. Sharad K. Pradhan to produce its commercial version on mass scale. 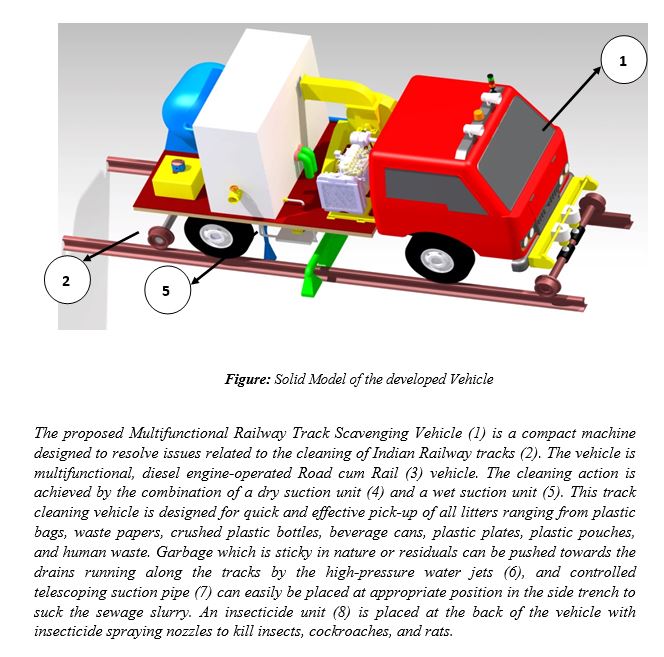