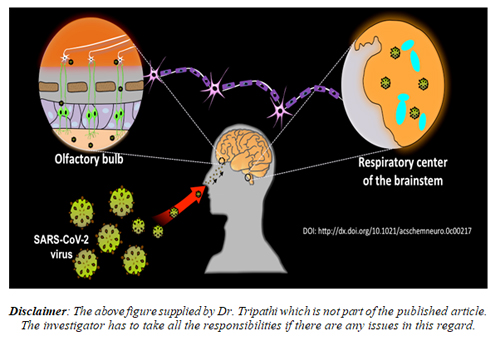 The team of researchers at CSIR-Indian Institute of Chemical Biology (IICB), Kolkata has explored the neuro-invasive potential of SARS-CoV-2 and suggested that the virus may infect respiratory center of the brain and attention should be focused on the respiratory centre of the central nervous system to search for mortality due to COVID 19.

The paper published in ACS Chemical Neuroscience and supported by Science & Engineering Research Board (SERB), a Statutory Body of the Department of Science & Technology (DST), implies that SARS-CoV-2 virus might enter the human brain through the nose and reaches the olfactory bulb of the brain. From there, SARS-CoV-2 virus might infect PreBötzinger complex (PBC), the primary center of the brain that controls the respiratory rhythm generation. This explains that collapse of the respiratory center in the brain may be responsible for breakdown of COVID-19 patients.

Team of researchers Dr. Prem Tripathi, Dr. Upasana Ray, Dr. Amit Srivastava and Dr. Sonu Gandhi discussed that although, lung is one of the most infected organs, several other organs, including the brain, are also affected. This is the first report that highlights the SARS-CoV-2 may target the PBC of the brainstem that controls respiration and causes respiratory collapse of COVID-19 patients.

The scientists have suggested that cerebrospinal fluid of COVID-19 patients and postmortem brain of deceased patients should be assessed to better understand the route of SARS-CoV-2 entry and its spread to respiratory center of brain.

PreBötzinger complex functions as the primary respiratory oscillator and it has been proposed as a center of respiration. It has been earlier shown that disruption of PBC causes lethality due to respiratory failure, suggesting its central role in respiratory rhythm generation. It is possible that SARS-CoV-2 may shut down respiratory center, and in turn breathing by infecting and destroying the PBC of the brainstem. Although this underline hypothesis needs to be validated for SARS-CoV-2, another recent study from a group of scientists at King’s College London, UK highlighting loss of smell was one of main symptoms of COVID-19 patients, hinting at the involvement of the same route through which SARS-CoV-2 may enter the brain.

SARS-CoV-2 and SARS-CoV not only share high levels of DNA sequence similarity, both of them exploit the same angiotensin-converting enzyme 2 (ACE2) receptor, through which the virus enters in target cells. Due to this, it was anticipated that the mechanism through which SARS-CoV infected the host cell could also be the same for SARS-CoV-2.

The study highlights that it is important to not only screen the COVID-19 patients for neurological symptoms but also further segregate when the symptom appears. The researchers have pointed out that while at present, the brain is not considered as the site of primary or secondary reason for death of COVID-19, attention need to be focused towards the respiratory center of CNS. Postmortem of brain of COVID-19 patients could be assessed to know the route of entry and affected areas including detailed assessment of respiratory center of the brain.