Scientists have shown that the geometry of space-time can cause neutrinos to oscillate. Neutrinos are mysterious particles, produced copiously in nuclear reactions in the Sun, stars, and elsewhere. They also "oscillate"-- meaning that different types of neutrinos change into one another – as has been found in many experiments. Probing of oscillations of neutrinos and their relations with mass are crucial in studying the origin of the universe. 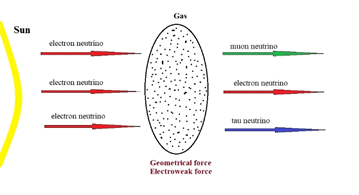 Neutrinos interact very weakly with everything else – trillions of them pass through every human being every second without anyone noticing; a neutrino’s spin always points in the opposite direction of its motion, and until a few years ago, neutrinos were believed to be massless. It is now generally believed that the phenomenon of neutrino oscillations require neutrinos to have tiny masses.

Professor Amitabha Lahiri of S N Bose National Centre for Basic Sciences (SNBNCBS) an autonomous institute under the Department of Science & Technology (DST), Government of India showed in a paper published along with Subhasish Chakrabarty, his student, that the geometry of space-time can cause neutrino oscillations through quantum effects even if neutrinos are massless . It was published in the journal ‘European Physical Journal C’.

Einstein’s theory of general relativity says that gravitation is the manifestation of space-time curvature. According to the SNBNCBS team, neutrinos, electrons, protons and other particles which are in the category of fermions show a certain peculiarity when they move in presence of gravity. Space-time induces a quantum force in addition to gravity between every two fermions. This force can depend on the spin of the particles, and causes massless neutrinos to appear massive when they pass through matter, like the Sun’s corona or the Earth’s atmosphere. Something similar happens for electroweak interactions, and together with the geometrically induced mass it is enough to cause oscillation of neutrinos.

For more details Amitabha Lahiri (amitabha[at]bose[dot]res[dot]in) can be contacted.