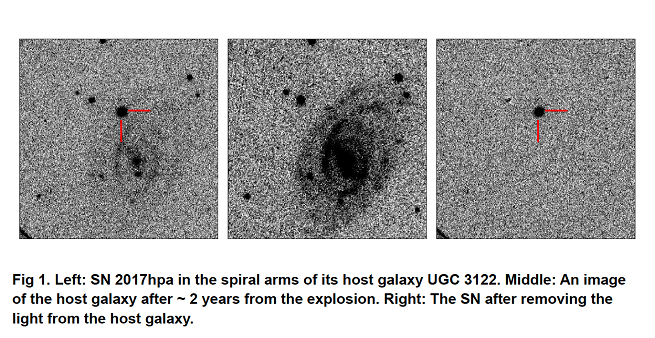 In 2011, the Nobel Prize was awarded to three scientists for discovering that the Universe is expanding at an ever-accelerating rate through observations of distant supernovae. Now a team of Indian astronomers observing such distant supernovae have narrowed down the possible mechanisms of explosion of such supernovae which provide key measures of cosmological distances.

Their detailed study of a supernova called SN 2017hpa, a particular type of supernovae called I a supernova, which exploded in 2017 helped narrow down the explosion mechanism of the supernovae by observations of unburned carbon in the early phase spectra.

The explosive death of a star as a supernova is one of the most spectacular and catastrophic events in the Universe. Type Ia supernovae are the result of explosions of white dwarfs that exceed their mass beyond the Chandrasekhar limit through accretion of matter. Their homogeneous nature makes them extremely good standardizable candles to measure cosmological distances. However, the explosion mechanisms which create these supernovae (SNe), and the exact nature of their progenitor systems (star which is at the origin of a supernova phenomenon) are still not yet clearly understood. While most SNe Ia are homogeneous, a good fraction of these events show diversity in both their light curve as well as spectral properties.

The study by Anirban Dutta, PhD student at Indian Institute of Astrophysics an autonomous institute under the Department of Science & Technology, Government of India along with collaborators which has been published recently in the journal ‘Monthly Notices of the Royal Astronomical Society (MNRAS)’will help in understanding the diversity as a function of the progenitor as well as its properties and the explosion mechanism of such supernovae.

The burning front in the white dwarf moves or propagates at speeds less than speed of sound which leaves behind unburned material. The expansion velocity calculated using these unburned features can provide an essential hint towards the velocity structure of the ejected material. It is generally expected that the unburned material will be present in the outermost layers of the ejecta and expand with velocity higher than velocity of the outer most layer of the star called photospheric velocity. In this study, the authors have shown that the unburned layer is moving with photospheric velocity indicating that mixing of the explosion materials is dominant within the ejected material. 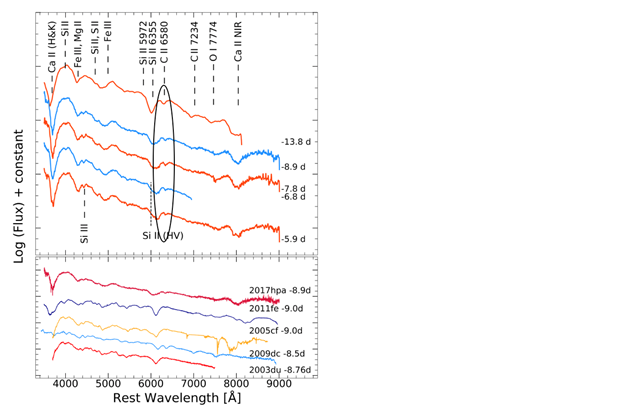 “It is very important to study more such exotic objects from the very early hours of explosion to very late phase to place tighter constraints on the explosion mechanism as well as the progenitor system,” said Anirban Dutta one of the researchers.

Fig.2 Early (pre-maximum) phase spectra of supernova SN 2017hpa obtained using the 2m Himalayan Chandra Telescope, IAO, Hanle. The spectral feature at 6580 A due to unburned carbon is marked in the spectrum.

For more details Anirban Dutta (anirban[dot]dutta[at]iiap[dot]res[dot]in) can be contacted.