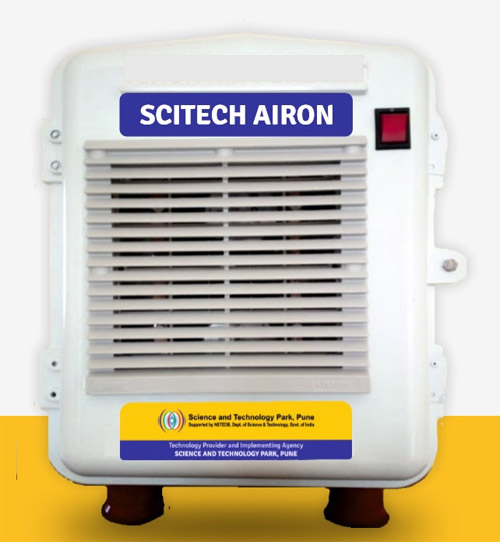 A technology developed under the NIDHI PRAYAS program initiated by the Department of Science and Technology (DST), Govt. of India by an incubatee company of Scitech Park, Pune has emerged as an effective solution for India’s fight against Covid 19 by reducing the viral load of infected areas within a room significantly within an hour.

DST has released Rs 1 crore to manufacture and scale up the product, and 1000 of them will soon be ready for installation in various hospitals in Maharashtra. JCLEAN WEATHER TECHNOLOGIES, a Pune based company, is manufacturing the product.

The negative ion generator titled Scitech Airon, which helps to control the virus, bacteria, and fungal infections in a closed environment, could clean up the air and disinfect areas which are exposed to the infection through Covid 19 positive cases and suspects. Hence it could ensure the wellbeing of the staff, doctors, and nurses who are working round the clock in the quarantine facilities by enhancing their disease resistance power and ability to fight the virus.

Its usefulness in killing disease-causing viruses and bacteria has been scientifically tested by various globally renowned labs in different types of closed environments like houses, hospitals, schools, farms, industries, and so on. One hour of operation of Ion generator machine reduces viral load within a room by 99.7% depending on room size.

The Scitech Airon ionizer machine generates negatively charged ions at approx hundred million per 8 seconds (10 ions per sec). The negative ions generated by the ionizer form clusters around microparticles such as airborne mold, corona or influenza viruses, mite allergens, bacteria, pollens, dust and so on and render them inactive through a chemical reaction by creating highly reactive OH groups called hydroxyl radicals and H O which are highly reactive and known as atmospheric detergents.

The detergent property generated by the ion generator helps in the breakdown of the outer protein of the allergens, viruses, and bacteria, which helps in controlling airborne diseases. It increases the body's resistance to infections and harmful environmental factors. This resistance could be helpful for the next 20-30 days outside the ion atmosphere. It also decomposes gaseous pollutants like Carbon Monoxide (1000 times more harmful than Carbon dioxide), Nitrogen dioxide, and Volatile Organic Compounds.

The efficacy of the Ion generator has also been observed on different types of pathogens like the Influenza virus, Coxsackie virus, Polio virus, Human Corona virus, a range of allergens, bacteria, and fungi. It could also be useful against floating viruses in the air on public transport, train stations, or airports, or especially within a confined space like a plane cabin, house, hospital ward, and so on.