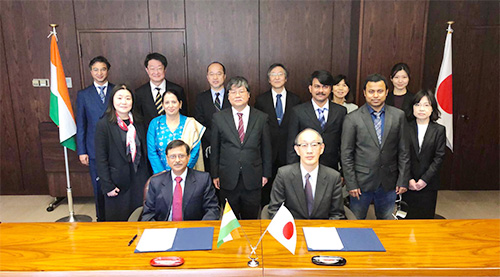 The third phase of the Indian beamline project, a facility for materials research set up under India-Japan Scientific and Technological Cooperation, was initiated on March 23, 2021, with special focus on industrial application research.

The initiation of the third phase took place with the signing of MoU between Ambassador of India in Japan Mr. Sanjay Kumar Verma with Director, Institute of Material Structure Science, Dr. KOSUGI Nobuhiro.

The phase would increase the number of young researchers from India to be trained in advanced X-ray techniques of material research. Besides, steps will be taken to allocate more beamtime so that more researchers can get access to it. At present, only 50 % of Indian researchers who apply receive beamtime.

This India-Japan Scientific and Technological Cooperation project was initiated between the DST and the KEK on 24 July 2007. In the first phase (2009-2015) of this project, an X-ray beamline (BL18B) was constructed by SINP in PF, and over the years, this facility has provided substantial amount of quality beamtime for the use of Indian scientists to carry out front-ranking research in advanced materials including nanomaterials.

So far, 45 Indian Institutes across the country have used this facility and published research papers in top-ranking International Journals. In the second phase (2016-2021), JNCASR and SINP jointly developed the beamline further to cater to the need of various users from India by implementing various modes of operation of the Indian beamline.

The required planning was finalized during a one-year extension (April 2015 to March 2016) of first phase through a Memorandum of Understanding (MoU), and it was mentioned in the Joint Statement in Japan during the visit of Prime Minister of India, Shri Narendra Modi, from 30 August to 3 September 2014. Recognizing the successful operation of the Indian Beam Line at High-Energy Accelerator Research Organization (KEK) at Tsukuba as a flagship cooperative activity, both sides announced their decision to take forward this collaboration in structural materials science area to the second phase for the study of advanced materials. Now it has been extended to the third phase.