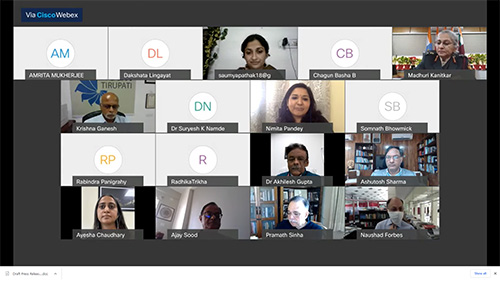 Eminent thought leaders, scientists, and industry leaders highlighted the importance of education hub and gave insights on the way forward at a session on ‘Using Glue Grant to develop Education hubs’. The webinar session was a parallel breakaway session II of a day-long programme -- Harnessing Education, Research and Skill Development for an Atmanirbhar Bharat organized by the Ministry of Education and inaugurated by Hon’ble Prime Minsiter, Shri Narendra Modi.

The Union budget 2021 declared setting up of umbrella structures of institutions in nine cities for better synergy among various research institutions, universities, and colleges while also retaining their internal autonomy for which there will be a provision for providing a Glue Grant.

Secretary, Department of Science and Technology (DST) Prof. Ashutosh Sharma while chairing the session, said that setting up of such clusters will be transformational in realizing missions that are not possible to be done by a single entity. “It would allow sharing of informational resources, human resources, and infrastructural resources and would also prevent duplication of different projects,” he added.

He elaborated on the structure, architecture, mechanism of incentivizing and implementation to take this mission forward.

He said that the Glue Grant would pave the way towards setting up the Higher Education Commission of India with 4 separate vehicles for standard-setting, accreditation, regulation, and funding.

Mr Naushad Forbes, Co-chair Forbes Marshall, suggested ways to strengthen the existing system in which students who graduate from educational institutions and then join different firms approach their intuition of education when they face a problem and the institution then takes up the problem in the form of a project. “This existing system can be made more powerful and continuous,” he added.

“The clusters should focus on nucleation of ideas rather than geographical or spatial factors. Clusters should emanate from the idea of triple helix of academia, industry and the state,” Dr R S Pawar, Chairman, National Institute of Information Technology Group, pointed out.

Underlining the importance of management and support structure in the implementation of the system, Prof. A K Sood, Honorary Professor, IISc. Bengaluru called for flexibility and sensitivity and emphasized on a serious continuous engagement with college teachers and smaller universities as well as focus on science communication and enhancement of research culture.

Prof. Bhaskar Ramamurti, Director, IIT Madras, shared his experience on forming clusters at the institutional and National level and suggested that the Glue Grant should also be used to encourage interactions of individuals who work together at different geographical locations.

“The clusters should be truly autonomous with a mandate on focused delivery and operational connection with the Indian Diaspora, giving closer synchronization with emerging global technology and also providing convergence at regional level,” said Additional Secretary, Ministry of External Affairs, Ambassador Renu Pall

Prof K. Ganesh, Director, Indian Institutes of Science Education and Research, Tirupati, talked about the new programme from the perspective of science education and how it can train science graduates to become science enablers, create a separate entity in each region and bring them together in an organized manner to meet the need of each institute. 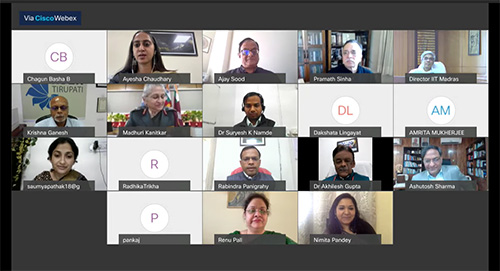 “This is a huge opportunity to set a new benchmark to create something from scratch and build great quality research to put India in a different league globally,” said Parmath Sinha, Founder and CEO Harrapa Education said “

Lt. General Dr Madhuri Kanitkar pointed out that this Glue Grant should be used to remove the lack of trust between different institutions, mainstream Atmanirbhar Bharat to include youth and females and changing the attitude from ‘I’ to ‘We’.

Dr Akhilesh Gupta, Adviser DST, briefed about the rationale of organising the session while Dr Ayesha Chaudhary, Officer on Special Duty (OSD) at O/o PSA to GoI, presented a brief background of establishment of City Clusters.

Six pilot cluster frameworks have already been initiated with support from the Office of the Principal Scientific Advisor (PSA) in cities that have a critical mass of S&T focused organizations and institutions, apart from well-developed diverse industries. These include Delhi-NCR, Bengaluru, Pune, Hyderabad, Jodhpur, and Bhubaneshwar.