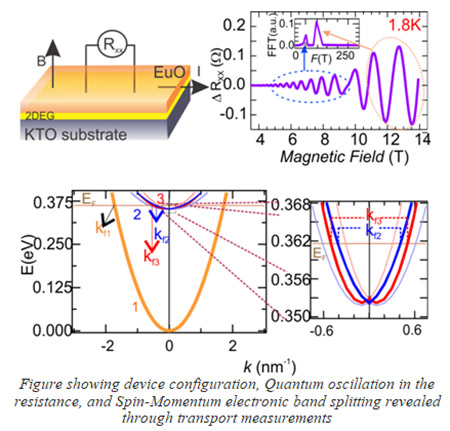 Scientists have produced electron gas with ultra-high mobility, which can speed up transfer of quantum information and signal from one part of a device to another and increase data storage and memory.

The need for attaining new functionalities in modern electronic devices has led to the manipulation of property of an electron called spin degree of freedom along with its charge. This has given rise to an altogether new field of spin-electronics or ‘spintronics’. It has been realized that a phenomenon called the ‘Rashba effect’, which consists of splitting of spin-bands in an electronic system, might play a key role in spintronic devices.

Due to the high mobility of the electron gas, electrons do not collide inside the medium for a long distance and hence do not lose the memory and information. Hence, such a system can easily remember and transfer its memory for a long time and distance. In addition, since they collide less during their flow, their resistance is very low, and hence they don’t dissipate energy as heat. So, such devices do not heat up easily and need less input energy to operate.

Aided by a grant from the DST-Nanomission in the form of a sophisticated, custom-made instrument called a combinatorial pulsed laser deposition setup, Dr. Suvankar Chakraverty Associate Professor at Institute of Nano Science and Technology (INST), Mohali (Punjab), an autonomous institution of Department of Science and Technology (DST), Government of India have produced 2DEG with ultra mobility at the novel interface composed of chemicals EuO and KTaO3. The strong spin-orbit coupling and relativistic nature of the electrons in the 2DEG resulted in the ‘Rashba field’. The research was published in the journal ‘Advanced Quantum Technologies’.

According to the INST team, realization of large Rashba-effect at such oxide interfaces containing highly mobile electron gas may open up a new field of device physics, especially in the field of quantum technology applicable for next-generation data storage media and quantum computers.