In a recent study, Indian Scientists have cracked the origin of ultralow thermal conductivity in silver antimony selenide (AgSbSe2), a crystalline solid having promising thermoelectric applications.

They have found that the AgSbSe2 has deformed local structure, which, while keeping the average structure intact, resulted in the ultra-low thermal conductivity. This work brings out the importance of investigating the local structure of a material to understand the origin of heat transport.

Heat transport is one of the fundamental properties of matter, and it has several applications, such as in semiconductor electronics, thermoelectrics, and thermal barrier coating. Heat propagates from hot end to a cold end of a medium until they are in thermodynamic equilibrium. In crystalline materials, where the atoms are arranged closely in a periodic and ordered fashion, heat mainly passes through conduction. They are highly thermal conductive due to the close arrangement of atoms which facilitates smooth heat transport. Heat conduction takes place when the neighboring atoms vibrate and transfer the heat. The rate at which heat can transfer from a hot end to a cold end is called thermal conductivity, and often the absolute value of this thermal conductivity dictates the applicability of a material in different industries. Materials with very high thermal conductivity are widely used as heat sinks in semiconductor electronics or as heat radiators, while ultra-low thermal conductive materials are useful in heat insulation applications or thermoelectrics. Therefore, studying and understanding the heat transport of materials are extremely important for both fundamental and practical points of view.

Prof. Kanishka Biswas and his student Dr. Moinak Dutta from Jawaharlal Nehru Centre for Advanced Scientific Research (JNCASR), Bangalore, an autonomous institute of the Department of Science & Technology, Government of India, in their recent paper published in ‘Angewandte Chemie’ have investigated the origin of ultralow thermal conductivity in AgSbSe2.

While, crystalline materials are highly thermal conductive, AgSbSe2 defies the norm and exhibits thermal conductivity like amorphous materials like glass. To investigate such anomaly in heat transport, they probed the arrangement of atoms inside the locally coordinated environment of the crystal using a technique called synchrotron X-ray pair distribution function (PDF) analysis. Through the analysis, they observed that the so-called periodically ordered and crystalline AgSbSe2 is actually not so ordered in local scale. The cation Sb is found to be off-centered from its ideal position, resulting in the distorting the otherwise perfect ordered arrangement. This breaks the symmetry locally, thus resulting in a low thermal conductivity. 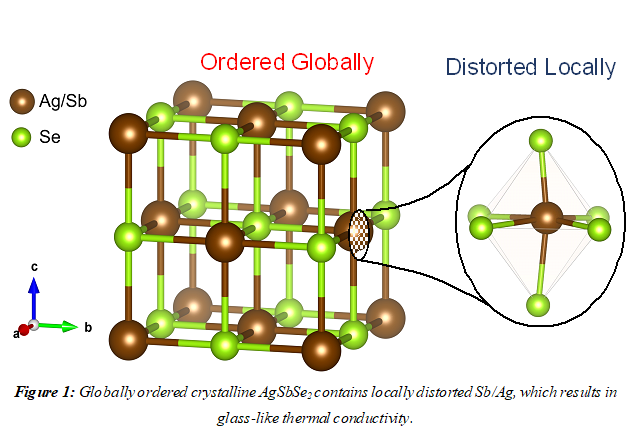 Explaining the initiation impression of AgSbSe2 being a periodically ordered crystal, Prof. Kanishka Biswas said that the distortion of Sb is only restricted to a few angstroms, and there is an equal probability of Sb distortion in six different positions, which are often in polar opposite directions. “So, when viewed for a large number of atoms, the six positions average out to look like that the Sb actually sits in its ideal position. Thus, such deformed local structure of AgSbSe2, while keeping the average structure intact, resulted in the ultra-low thermal conductivity,” he pointed out.

The synchrotron X-ray PDF experiment performed under India-DESY (Deutsches Elektronen-Synchrotron) collaboration supported by DST synchrotron access programme establishes that more often than not, most of the fundamental physical properties of materials can be traced to their local structure, which can only be understood if it is looked deeper into the atomic scale.

For more details, Prof. Kanishka Biswas (biswas[dot]kanishka[at]gmail[dot]com) can be contacted.