In a recent study, an Indian researcher traced the tectonic evolution and the nature of the Greater Maldive Ridge (GMR) --- a very crucial geodynamic features in the western Indian Ocean whose origin has been the centre of many a scientific debate.

The study can help reconstruct the original Gondwanaland break up and dispersal that led to present-day configuration of continents, continental fragments, and formation of ocean basins in the Indian Ocean.

The Maldive Ridge is an aseismic ridge that is not associated with earthquake activities. This ridge, located in the western Indian Ocean, southwest of India, is not well investigated. It is of paramount importance to gain knowledge on the structure and geodynamics of aseismic ridges (as it provides valuable inputs towards understanding the evolution of ocean basins).

The study by the Indian Institute of Geomagnetism, Mumbai, an autonomous institute of the Department of Science & Technology, Govt. of India, has chalked the possible geological cross-sections along the GMR for the first time with the help of satellite-derived high-resolution gravity data. The researchers postulated that the GMR may be underlain by an oceanic crust. The results from their study can provide additional constraints in understanding the plate-tectonic evolution of the Indian Ocean, better.

The research work carried out by Dr. Priyesh Kunnummal under the guidance of Dr. S.P. Anand provides the crustal architecture and the state of gravitational equilibrium between Earth's crust and mantle (isostasy) of the Greater Maldive Ridge segment of the larger Chagos-Laccadive Ridge (CLR) system. Their study, based mainly on the interpretation of gravity anomalies (small differences in the pull of gravity caused by the lateral variations of density within the subsurface) with broadband seismic and refraction seismic data, provided for the first time a three-dimensional picture of the variation of Moho along the Greater Maldive Ridge and the adjoining ocean basins. The depth to the boundary between the earth’s crust and the mantle or the Mohorovicic discontinuity (Moho) over the GMR was systematically mapped along with the finer variation of effective elastic thickness (Te) at the place. The research related to Te variations and isostatic compensation has been published recently in the journal ‘Gondwana Research’.

IIG team found that Moho is deeper over the Maldive Ridge (MR) segment and shallows southwards in the Deep Sea Channel region (DSC). However, the effective elastic thickness (a proxy for the strength of the lithosphere) values were lower over the MR compared to DSC region. Maldive Ridge and Deep Sea Channel region may probably be oceanic in nature with the presence of underplated materials associated with the Reunion hotspot volcanism. The research suggests that Maldive Ridge might have formed in the close vicinity of the Mid-Oceanic Ridge (where creation of a new ocean floor occurs due to divergent motion of lithospheric plates or spreading centre). Meanwhile, the DSC region was under a long transform fault (offset between the spreading centres, which neither create nor destroy lithosphere), which hindered melt production and gave rise to gap between Chagos and Maldive Ridge during the Plume-ridge interaction.

Satellite-derived gravity anomalies are very helpful in deciphering the crustal architecture where traditional shipborne geophysical data are either not available or scanty. 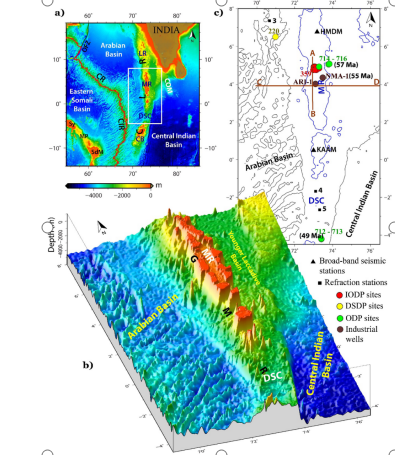 Figure. 2. Sketch showing a possible geological cross-section along a N-S profile (along 73.25° longitude) over the Greater Maldive Ridge.