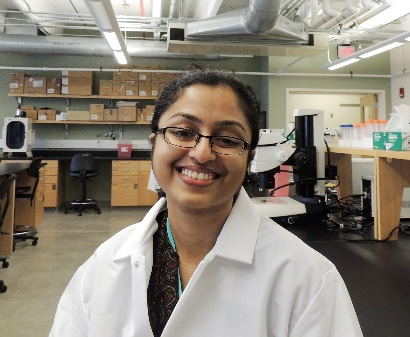 Dr. Antara Banerjee, a scientist in Structural Biology Division of National Institute for Research in Reproductive Health, Indian Council of Medical Research, Mumbai, who has contributed towards understanding the endocrinology in female reproduction that could be useful for assisted reproductive technologies, has received the SERB Women Excellence Award for 2021.

Study of the follicle-stimulating hormone (FSH) and its receptor (FSHR), proteins that play a central role in reproduction by bringing about formation of ova or egg in females.

The FSHR has intrigued Dr. Banerjee since long. In her doctoral thesis, she probed this hormone receptor that played a crucial role in mammalian reproduction. It later helped her identify residues in the extracellular loops of Follicle Stimulating Hormone Receptor (FSHR) that are crucial for FSH-FSHR interaction providing more information about the role of extracellular roles of G-protein coupled receptors in their function.

“I identified residues in the extracellular loops of FSHR crucial for the hormone-receptor interaction by generating and characterising mutants with respect to the Wild-type counterpart by a method called the site-directed mutagenesis approach,” Dr. Banerjee explained. She added that the functional characterization of two naturally occurring FSHR mutations was also carried out to help understand the pathophysiology associated with these mutations.

Her work has led to characterization of some naturally occurring mutations in FSHR that were responsible for affecting its function, thus resulting in reproductive pathologies.

Dr. Banerjee, along with her group, has initiated studies on understanding the biological milestone known as puberty--the process by which a child's body matures into that of an adult capable of sexual reproduction. “Mutations in the neuropeptide hormone kisspeptin-1 or its receptor which can cause precocious (early) puberty will be studied in a collaborative work with a team consisting of basic scientists, pediatricians, as well as geneticist,” Dr. Banerjee pointed out.

For more details, Dr. Antara Banerjee (antarabnrj[at]gmail[dot]com) can be contacted.