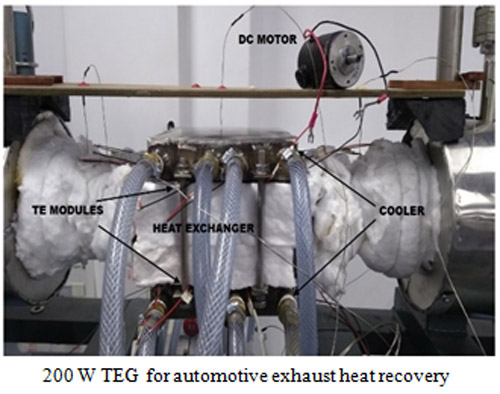 Researchers at International Advanced Research Center for Powder Metallurgy and New Materials (ARCl), an autonomous institute under the Department of Science and Technology, Govt. of India, have developed a thermoelectric generator which converts the waste heat from an auto exhaust into useful power.

The exhaust heat, normally in the temperature range of 200-600°C, is let out in the atmosphere due to the absence of economically viable technology to convert it into useful power. The research team at ARCl has developed a 200 Watt thermoelectric generator (TEG) that can convert waste heat from the automotive exhaust into DC power. The TEG generator has no moving parts, thus ensuring noise, vibration, and maintenance-free operation of the system.

Efficient waste heat recovery is gaining attention due to high energy loss of 20-50 % in various sectors in the form of waste heat. High-temperature waste heat has the potential to be recycled into useful electricity. Materials with thermoelectric capability, which work on the principle of ‘Seebeck Effect’ (a phenomenon in which a temperature difference between two dissimilar electrical conductors produces a voltage difference between the two substances), can convert thermal energy into electricity from the temperature differential.

Based on this effect, the researchers have built a generator from thermoelectric materials which recovers electricity from waste heat released by various processes such as auto exhaust heat, power plant heat, industrial heat, solar heat, and so on and can contribute to sustainable energy demand. 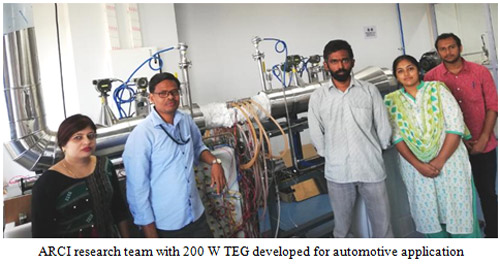 The TEG developed generated more than 180 Watt power from the exhaust gas of 350°C with acceptable backpressure in the heat exchanger used for capturing the heat. The cold side of the TEG was maintained by forced cooling using aluminum cold plates.

The TEG technology developed at ARCI is also suitable for generating power from small and medium-sized fishing boat engine waste heat as well as converting the heat accumulated in a concentrated solar thermal system. The team at ARCI is making further efforts to make these economically viable for different applications.