An earthquake of high magnitude likely in Himachal Pradesh in future: Study

Himachal Pradesh could be hit with an earthquake of magnitude equal to or greater than 8.0 on Richter scale in the future, a study has suggested. 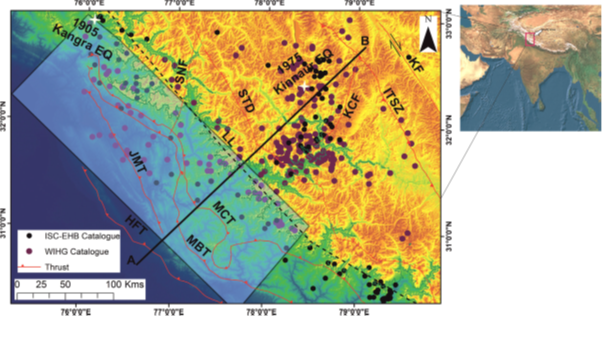 The study could have major implications in terms of planning in the face of seismic hazard, earthquake predictions and understanding the source genesis of great earthquakes beneath active collision zone.

Recent incidences of earthquake in the Northern part of India have caused concern among scientists and planners. It is in this context an earlier study has caught attention. This study suggests that there is enough amount of strain energy still stored below the Himalayas. This is because very minimal amounts of strain energy is released in the form of microseismic and megathrust earthquakes till now.

The occurrence of moderate and microseismic activities has increased the strain accumulation along with the Main Himalayan detachment fault, which is already due for a large rupture event and can host a magnitude 8.0 earthquake anytime in the future.

“As the entire Himalayas is vulnerable to earthquakes, therefore in order to avoid damage due to earthquake, we need to make efforts to build an earthquake resilient society through earthquake preparedness and enforcement of good construction practices. It is also important that earthquake early warning systems be installed, which may mitigate the risk in high population density regions in the Himalayan arc,” said Dr. Sushil Kumar, Scientist 'G' & Head Geophysics, WIHG who was part of the study.

The study also suggests that if an earthquake occurs beneath the Himalayas and involves the whole of the Himalayan detachment fault in its generation process then its moment magnitude can be up to 8.0 (Mw).

This, the scientists said is because the total amount of energy released since the last great event is only a fraction (3-5%) of the accommodated energy which is equal to that released during a single magnitude 8.0 earthquake.  The study was published in 2018 in the ‘Journal of Asian Earth Sciences’.

The observed seismicity in the region signifies a higher level of tectonic activity in this region. This also explains the reactivation of the major fault called ‘the Kauirik fault’ that can lead to a considerable number of earthquakes in Himachal Pradesh.