Scientists have conducted experiments proving that ‘Reality’ as we think of it may not exist, after all, firmly establishing the predictions of quantum mechanics. Einstein had famously asked: Do you really believe that the moon isn’t there when nobody looks? This question about the everyday believed notion of realism doubted the predictions of quantum mechanics and suggested that a system has well-defined properties at any instant, even when not measured. A remarkable way of testing realism had been provided by the Leggett Garg inequality (devised in 1985 by Anthony Leggett and Anupam Garg, which looks for correlations between measurements to see whether quantum or classical rules are being followed).

Experimental falsification of such inequality would not only falsify realism but also would confirm that quantum mechanics is not limited to micro-world but can also be applied to bigger objects. This could make way for harnessing non-classicality or quantumness of single photons for technological applications in secure quantum communications and quantum sensing crucial in today’s requirements of secure information transfer.

The single photon is the primary workhorse for secure quantum communications. Certification of unambiguous quantumness would play a key role in ensuring the reliability of the information transfer process.

Leggett and Garg had realised they could test the quantumness of very big objects in theory. Their inequality could tell us whether realism holds true in the everyday world. In recent years, Leggett-Garg experiments carried out on various quantum systems, from superconducting fluids and photons to atomic nuclei and tiny crystals, have demonstrated that the microscopic world is non-real. For this, they have found ways of measuring particles without disturbing it.

However, there are a number of limitations of these experiments. Scientists across the world are trying to come up with better technology and appropriately designed strategies for achieving a fully conclusive experimental test, falsifying the notion of realism by showing violation of the Leggett Garg inequality. A team of scientists from Raman Research Institute (RRI), an autonomous institute of the Department of Science and Technology, have successfully addressed this challenge. They have conducted an experiment that has shown a significant amount of violation of Leggett Garg inequality by studying single photons.

The experiment was performed at the Quantum Information and Computing (QuIC) laboratory of RRI in Bangalore and was led by lab head Prof. Urbasi Sinha along with her Ph.D. student Kaushik Joarder. Theoretical contributions from Prof. Dipankar Home of the Bose Institute Kolkata and Dr. Debashis Saha of the SN Bose Centre for Basic Sciences Kolkata played a significant role in the work.

The work published recently in the journal ‘PRX Quantum’ is the first ambiguity free experiment to show violation of Leggett Garg inequalities and termed as ‘the most watertight test of macrorealism yet in a system made of photons.’ by Prof. Jonathan Halliwell of Imperial College London, UK as quoted in New Scientist. The team conducted the experiment with single photons, which are single particles of light, and proved the quantumness of the single-photon comprehensively. In this experiment, the macroscopicness does not come from large mass but the macroscopic spatial separation between the two paths of the devised interferometer. This experimental architecture will provide a natural test bed for other experiments that can use large masses.

This is the first experiment that shows the most decisive refutation of the notion of realism by the closure of what are known as “loopholes” plaguing all the relevant experiments to date. The ingeniously developed strategies and technologies developed for the closure of all the existing loopholes will prove to be very useful for harnessing such non-classicality/ quantumness of single photons for technological applications in secure quantum communications and quantum sensing.

Testing the macroscopic limit of quantum mechanics is a very important area of research. This is a very important question as it tells up to what extent quantum principles dominate -- the quantum-classical boundary. The Leggett Garg inequality violation has been studied in systems of increasing masses to investigate the macroscopic limit of quantum mechanics. This loophole-free experiment provides a new way of testing this macroscopicity by using quantum interference as a tool. Thus it will provide a natural test bed for other groups to follow up on and use in massive systems.

A buzzing area of research is to explore whether quantum physics is the ultimate theory. This experiment actually shows remarkable agreement with quantum physics predictions. Falsification of the Leggett Garg inequality through the experiment of the scientists violates the concept of realism as in quantum theory.

“In our analysis, we have been able to show that not only are we violating the Leggett Garg inequality in a loophole-free manner. So we are also showing remarkable agreement with the predictions of quantum mechanics. Thus, our experiment also provides a loophole-free proof of the quantumness of the single photon,” told Prof. Urbasi.

This work, partially funded through the Centre of Excellence in quantum technologies grant from the Ministry of Electronics and Information Technology as well as the Quantum Enabled Science and Technology grants from DST, is a step forward in establishing quantum mechanics as the ultimate theory. 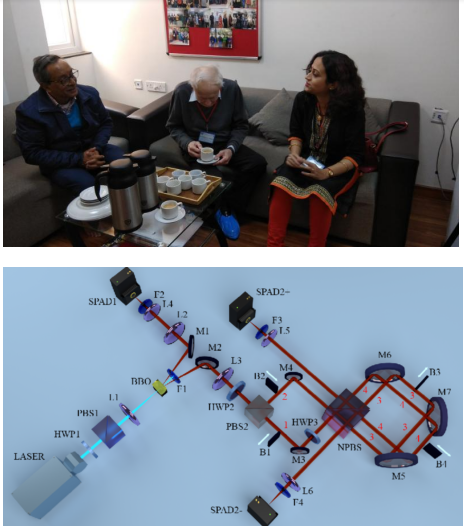