Researchers from Indian Institute of Geomagnetism (IIG), an autonomous institute under the Department of Science & Technology, have found the mighty Himalayas subside and move up depending on the seasonal changes in groundwater. Since Himalayas play a very important role in influencing climate in the Indian subcontinent, the study funded by DST will help in understanding how hydrology affects climate.

The Himalayan foothills and the Indo-Gangetic plain are sinking because its contiguous areas are rising due to tectonic activity associated with landmass movement or continental drift. The new study published in the Journal of Geophysical Research shows that subsidence and uplift are found to be associated with seasonal changes in groundwater, apart from the normal, common reasons. Water acts as a lubricating agent, and hence when there is water in the dry season, the rate of slip of the fault in this region is reduced.

Nobody till now has looked at the rising Himalayas from a hydrological standpoint. Ajish Saji, working towards his Ph.D. under Prof Sunil Sukumaran, has looked at this phenomenon through this innovative prism. The water storage and surface load variations are quite tricky to quantify through the application of extant global models.

In the Himalaya, seasonal water from glaciers, as well as monsoon precipitation, plays a key role in the deformation of the crust and the seismicity associated with it. The subsidence rate is associated with groundwater consumption.

The researchers have made the combined use of Global Positioning System(GPS) and Gravity Recovery And Climate Experiment (GRACE) data, which has made it possible for them to quantify the variations of hydrologic mass. The GRACE satellites, launched by the US in 2002, monitor changes in water and snow stores on the continents. This made it possible for the IIG team to study terrestrial hydrology.

According to the researchers, the combined GPS and GRACE data suggest a 12% reduction in the rate of the subsurface slip. This slip refers to how fast the fault is slipping relative to the foot and hanging wall. The slip occurs at the Main Himalayan Thrust (MHT), due to hydrological variations and human activities, over which there is the periodic release of accumulated strain. 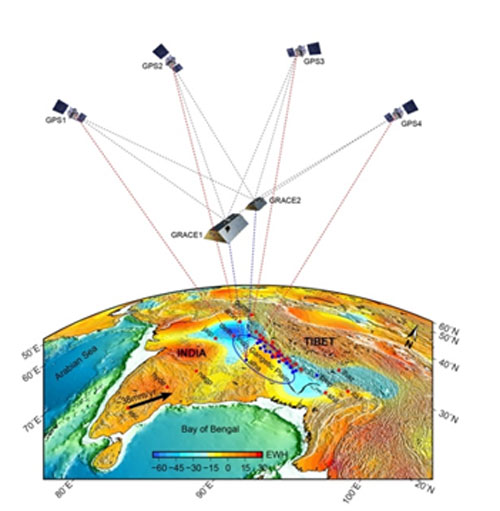