An International Symposium at Jawaharlal Nehru Centre for Advanced Scientific Research (JNCASR) Bengaluru, a multidisciplinary research institute funded by the Department of Science and Technology, Government of India, discussed Modern Approaches in Chemistry and Biology- MACB-2020.

The three-day symposium organised from February 18-20, 2020, saw 25  leading researchers from all over the world in the areas of chemistry and biology like CNR Rao from JNCASR, Roberto Car from Princeton University, USA, Anthony Cheetham from  University of Cambridge, the UK deliberate on the subject.

The Symposium had participants affiliated to the University of Texas at Austin, University of Singapore, Temple University, ETH Zurich, University of Cambridge, JNCASR, IISc, IITs, IISERs, IIITs, TIFR, NISER and so on. One hundred registered participants, including internationally renowned professors from India and abroad, graduate students, Post-docs, and scientists, attended the event.

The symposium included 23 talks by eminent scientists followed by question-answer session and fruitful discussions. More than sixty posters were presented by graduate students, post-docs, and young faculty during the symposium.

Interaction among participants at the symposium led to the exchange of ideas and generated possibilities of collaborations in the future. 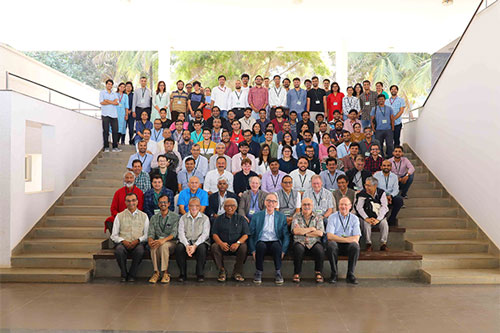