A team of Scientists from Sree Chitra Thirunal Institute of Medical Science and Technology (SCTIMST), an autonomous institution under the Department of Science and Technology, have developed a nickel-titanium alloy based occlusion device for non-surgical closure of Atrial Septal Defect (ASD) in the heart.

Atrial Septal Defect or in common language, a hole in the heart is the most common type of heart disorder that occurs congenitally. The device was developed by the Technical Research Centre for Biomedical Devices functioning under the Biotechnology Department at SCTIMST, and applications have been submitted for getting the Indian patent for the device.

The general structure of an ASD occlusion device consists of a braided two-lobed structure. A number of wires are braided together and shaped to form the device. The free ends of the wires are held together on both sides of the device.

Device migration and atrial roof erosion are two major issues that are reported with currently used ASD devices. The device developed by SCTIMST is aimed to mitigate these common issues and risks. The device has been designed with no hub on the left side of the device, which ensures a smooth tissue layer formation over the device in-due course of time after implantation in the left atrium. The hub on the right side has been retained as part of the release mechanism while delivering the device.

In ASD, the hole is on the wall separating the upper chambers of the heart, i.e., the left and right atria. The defect occurs during the development of the heart chambers when the growth of the wall (septum) separating the left and right atria might become incomplete, causing the formation of defects like ASD and Patent foramen ovale (PFO), another type of hole in the septum. Though there is often no clear cause identified so far, genetics and environmental factors might play a role. Small defects have a probability of healing up without any intervention during infancy or early childhood.

Presently the demand for the device is met chiefly by imports with one domestic manufacturer. Also, the current price of the device is around Rs 60000, which is expected to be reduced with the ASD occluder developed at SCTIMST. 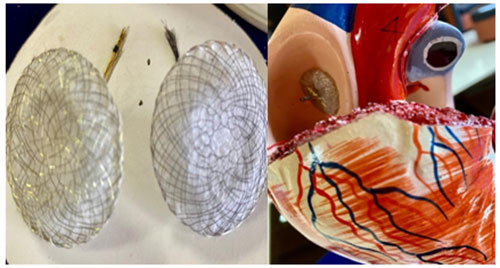