After a serious injury, few challenges are more urgent than stopping life-threatening bleeding.

Scientists from the Institute of Nano Science and Technology (INST), an autonomous institute under the Department of Science & Technology, have developed a starch-based ‘hemostat’ material that concentrates the natural clotting factors in blood by physically absorbing excess fluid.

The biodegradable microparticles that combine to form a gel on a wound offer significant improvements over existing alternatives.

The early-stage development of the material has been published in the journal Materialia, and Dr. Deepa Ghosh and her colleagues who worked on it hope to develop a versatile, potentially life-saving, and inexpensive product that would be a more realistic solution for lower-income economies worldwide.

Hemostat materials absorb excel fluid by concentrating the natural clotting factors in the blood that are critical for stopping the blood flow; however, the bleeding can restart when non-biodegradable materials are removed.

By chemically modifying natural starch to form microparticles, Dr.Ghosh’s team has combined the advantages of biocompatibility and biodegradability with a five- to ten-fold increase in fluid absorption and much-improved adhesion. When the microparticles combine, they create an adherent gel that can remain on the wound until slowly dissipating as healing proceeds.

The microparticles are prepared by modifying some of the chemical hydroxyl groups on starch to carboxymethyl groups while also incorporating the beneficial calcium ions, which encourages the aggregation of red blood cells and platelets and their activation to generate the fibrin protein network that forms a stable blood clot. This modification increases the ability of the molecules to interact with water. This is the basis of its impressive ability to absorb fluid from the blood and hence concentrate the clotting factors.

The microparticles of the product, known as 'calcium-modified carboxymethyl-starch,' swelled up to form a cohesive and adherent gel within 30 seconds after contact with blood in lab tests.

“Presently, no single hemostatic agent exists that can work in all situations,” said Dr. Ghosh. She added that current hemostat materials are very expensive and available mostly in developed countries.

In animal studies with real wounds, moderate to heavy blood flow was stopped in less than one minute. The animal studies also indicate that the material is non-toxic and confirmed its biodegradability. 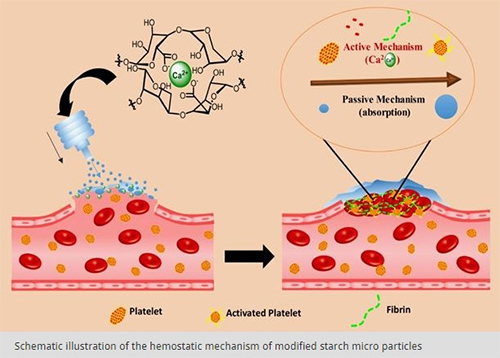