Researchers have discovered a faint but star-forming galaxy, around 136 million light-years away which was so far undetected since it lies in front of a much brighter galaxy, The galaxy has a ‘ghost’ like appearance in the optical images because of its low disk density, but the inner disk shows star formation. The inner disk star formation helped its detection in UV and optical images. An accurate census of such faint galaxies is essential to measure the total mass of all objects made normal atomic matter (stars and gas) in the Universe.

As optical telescopes have become more and more powerful, they are sensitive enough to detect galaxies that are extremely faint. Such galaxies are called low surface brightness galaxies or ultra-diffuse galaxies and have a surface brightness that is at least ten times fainter than the surrounding night sky. Such faint galaxies may account for up to 15 % of the mass of the universe. However, they are difficult to detect because of their inherent low luminosities.

A team of researchers from the Indian Institute of Astrophysics, Bengaluru consisting of Jyoti Yadav, Mousumi Das and Sudhanshu Barway, along with Francoise Combes of College de France, Chaire Galaxies et Cosmologie, Paris, while studying a known interacting galaxy NGC6902A noticed that the colour image (Dark Energy Camera Legacy Survey (DECaLS) colour image) of the south-west outer region of the galaxy NGC 6902A in the shows diffuse blue emission. DECalS is a deep optical survey conducted on international telescopes that can be used to detect diffuse galaxies. This south-western region shows prominent star-forming regions in the Far Ultraviolet (FUV) image. Most of the FUV emission in galaxies is due to young stars of types O and B ---the most massive stars and also the most short-lived in the galaxies. But they emit FUV light for 100 million years which is comparatively long compared to the other star formation tracer. This excess FUV light prompted the researchers to investigate the peculiar feature in more detail to determine the cause of the interaction.

The researchers measured the distance of NGC6902A, a previously known galaxy and the faint star-forming regions using emission lines in the spectra. They found that these star-forming regions are at a distance of around 136 million light-years, whereas the distance of NGC 6902A is around 825 million light-years. This means that the diffuse blue emission was from a foreground galaxy, which they had discovered using FUV and MUSE data. They have named it UVIT J202258.73-441623.8 (or UVIT J2022 for short) based on the fact that data from Ultra-Violet Imaging Telescope (UVIT) on AstroSat helped them to discover the galaxy and determine its coordinates on the sky. They also used Multi-Unit Spectroscopic Explorer (MUSE) instrument on the Very Large Telescope (VLT) in Chile and images from IRSF in South Africa and from Dark Energy Camera Legacy Survey (DECaLS) in this study. This research has been published in the journal ‘Astronomy & Astrophysics’. 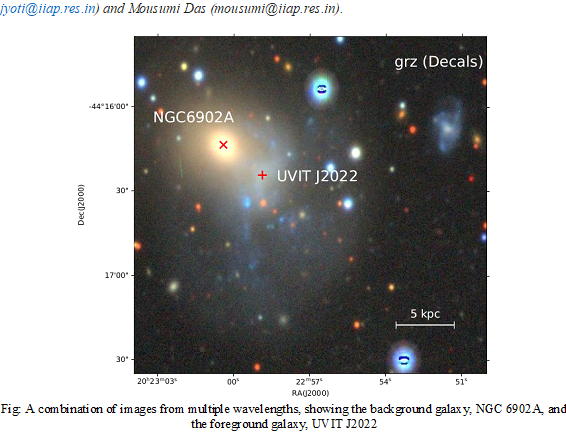 UVIT J2022 was previously mistakenly thought to be a part of the interacting tail of NGC 6902A. This study raises the possibilities that there could be similar diffuse galaxies that have been wrongly interpreted as interacting galaxies due to their superposition with foreground or background galaxies. Star formation traced by ultraviolet, optical emission could be a way to detect such diffuse star-forming galaxies in our local universe.

“The material that we see around us is known as baryonic matter. Cosmological studies suggest that baryonic matter should make 5% of the Universe's mass. The rest of the mass should be contributed by unknown forms, such as dark matter and dark energy. We still do not have a clear understanding about the 5% of the baryonic content present in the Universe; we do not know where all the baryons are present. These faint galaxies can act as a link for understanding the origin of missing baryons in the universe, as they may contribute significantly to the baryonic mass in the universe.”

The discovery of a new foreground galaxy that was mistaken as a tidal feature of a bright background galaxy using powerful instruments such as UVIT and MUSE opens a gateway to searching for similar cases, where blue diffuse tidal features in interacting galaxies may not be the remnant of a merger but instead a separate foreground and/or background galaxy. It also shows the power of using star formation tracers such as FUV and Hα emission to detect diffuse galaxies.