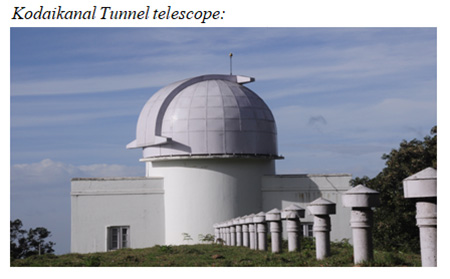 Indian Institute of Astrophysics (IIA), a premier institute in the country devoted to research and development in astronomy, astrophysics, and related physical sciences, which is celebrating the Golden Jubilee, has several research achievements in its kitty.

The institute, which explores the solar system, our galaxy, external galaxies, and other distant objects in the Universe, has recently redrawn the coevolution of the black hole and the galaxies, detected fluorine in hot extreme Helium stars, thus tracking their evolution mystery and also found prodigal stars from first one billion years of the Universe in the Milky Way.

Research in the Sun and Solar System areas is one of the longest pursued disciplines at IIA. The studies of star-forming regions, star clusters, stellar atmospheres, abundances in stars, and the chemo-dynamics of the Galaxy are areas that have traditionally been pursued in IIA. Studies of nearby galaxies, normal and active galaxies, high-redshift universe, and cosmology are other areas pursued by the researchers. The theoretical research areas include topics on pulsars, black holes, compact objects, and relativistic astrophysics. Scientists are also involved in building instruments that are deployed in the observing facilities. 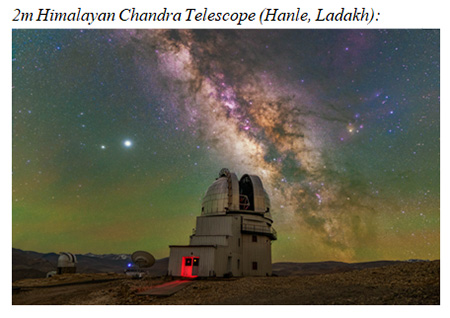 The main observing facilities of the Institute are the Kodaikanal Solar Observatory located at Kodaikanal, the Vainu Bappu Observatory located at Kavalur, the Indian Astronomical Observatory with headquarters at Leh, and the Gauribidanur Radio Observatory located at Gauribidanur. The Centre for Research and Education in Science and Technology (CREST) campus located at Hosakote, Bengaluru (Rural) has the IAO remote observing facility and the M.G.K. Menon Space Sciences Laboratory for integration and calibration of space payloads. Thirty Meter Telescope (TMT) which is being built by an international consortium with India as a partner. Being the nodal Institute, the main campus houses the coordination center of the India-TMT. 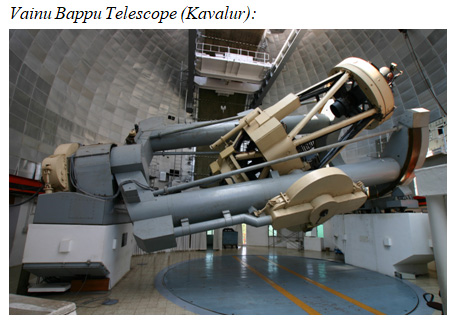 The Ultraviolet Imaging Telescope (UVIT) on AstroSat, India’s first space observatory, was assembled, tested, and calibrated in the MGK Menon laboratory for space sciences in the CREST campus. The Visible Emission Line Coronagraph (VELC) on the soon-to-be-launched Aditya-L1 mission is currently being assembled in the laboratory. The environmental test facility of this laboratory was recently inaugurated by the Honorable Vice President on 29th December 2020. The Hon’ble VP also inaugurated the segment polishing facility for the Thirty Meter Telescope located in the CREST campus.

The Institute plans to build a National Large Solar Telescope in Merak, Ladakh. This is a new-generation 2m class telescope, along with Aditya-L1, will help India to continue to be at the forefront of Solar and Space-weather studies. The Institute also plans to build a large optical-IR telescope in the Ladakh region as a national project, leveraging on the capacity built in the country by participating in the TMT project.

The Institute traces its origin to an observatory that was first set up in 1786 in Madras (now Chennai). The observatory was shifted to Kodaikanal in 1899. In 1971, the Astrophysical Observatory became an autonomous research institute under the name of the Indian Institute of Astrophysics. The headquarters shifted to the Koramangala, Bengaluru, in 1975. The Institute is supported and guided by the Department of Science and Technology, Government of India.