When a liquid is super cooled, the particles in the liquid slow down drastically, and on further decreasing the temperature, the molecules stop moving altogether and transform into a glass. However, scientists were intrigued by the capability of some artificial active matter particles like tissues, bacterial colonies to elude this transformation and keep moving because of the present defects in which they are packed together.

Researchers have now identified the mechanism that helps such active matter particles where the individual constituents are elongated in shape, elude turning glassy. They found that assemblies of active elongated particles spontaneously coalesce into beautiful swirls, a technique that keeps them from freezing into the glassiness. The swirls are mediated by the defects in the packing. Since such motile defects are known to play a role in the human body’s defence against precancerous, abnormal cells, their study could provide a tool for probing cancerous metastasis.

Gaining microscopic insights into the true nature of the glass transition remains one of the most challenging problems in condensed matter physics. Glasses are difficult to understand since they are mechanically rigid like crystals but at the same time have a disordered structure like that of a liquid. Glasses and other amorphous solids could be made of atoms, organic molecules, polymers, or assemblies of colloidal particles.

Over the past two decades, it has been observed that many phenomena describing glassy dynamics in dead passive systems like molecules and colloids could also be observed in dense active matter systems (that convert free energy into some form of systematic motion) ranging from living systems like tissues, bacterial colonies, bird flocks, animal herds to non-living systems like Janus colloids and macroscopic granular matter driven by mechanical vibrations. However, there were some exceptions.

Pragya Arora, Prof. Rajesh Ganapathy from Jawaharlal Nehru Center for Advanced Scientific Research (JNCASR) and Prof. Ajay. K. Sood from IISc, who studied the glassy dynamics of an artificial active-matter system, found that patterns can form in systems consisting of active elongated particles that help it elude turning glassy. Their research published in Physical Review Letters showed that the patterns were triggered by the defects in the orientation of the particles, and this helped keep the particles moving, preventing the system from behaving like a typical glass.

With an aim to develop well-controlled experiments with a synthetic active matter where activity can be tuned systematically while keeping the particle shape features fixed, the team from JNCASR, an autonomous institute of the Department of Science and Technology (DST), chose a system of vibrated granules for their experiment. They used millimetre-sized ellipsoidal particles fabricated by 3-D printing, made self-propelled by vertical vibrations. The researchers had found in earlier studies that particles with an asymmetry in their shape, mass, and/or friction coefficient along the two ends would become active or self-propelled under vibration. 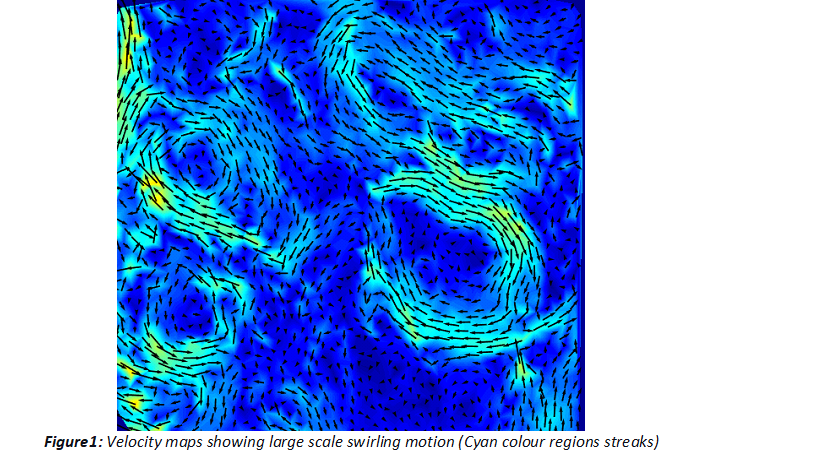 Building on these results, they made particles with one end rougher than the other to include friction differences. They also included a hole in the print process to increase the mass asymmetry between the two sides and tuned the particle activity by changing its centre of mass by playing with the position of the hole. Arora and her colleagues found that at higher particle densities, most active particles spontaneously coalesced into swirls.

According to Arora, cellular systems have several biological functions, such as cell death, extrusion, tissue regeneration and sorting, which show active behaviour. This study can shed light on these fundamental biological processes where these motile defects are critical players.