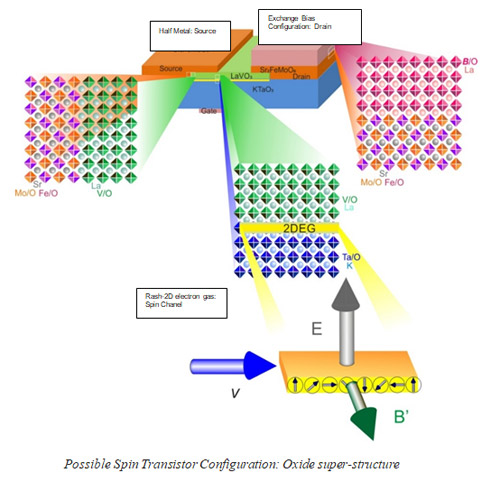 Scientists from Institute of Nano Science and Technology (INST), Mohali, an autonomous institute under the Department of Science & Technology (DST), Govt. of India, have designed an interface of two insulating materials of LaVO3-KTaO3 that can host a highly mobile two-dimensional electron gas. This two-dimensional electron gas (2DEG) at oxide interfaces is a novel conductor that exhibits the signature of strong spin-orbit coupling and is a promising candidate in modern electronic devices.

The research by Dr. Suvankar Chakraverty and his group from INST has been carried out through world-class capabilities to produce highest-quality oxide thin films, interface and heterostructures and novel measurements of emergent phenomena arising from quantum phenomenon coupled with the theory of relativity:  Rashba Effects (momentum dependent splitting of spin-bands in an electronic system) in 2d-electron gas at the interface of two insulating oxide layers, where the magnetic state of an electron (q-bit) can be control using electric field. It exhibits a perfect blending of the theory of relativity and quantum mechanical phenomena. Such system can be a hunting ground for exotic quasiparticle excitations, which otherwise could only be seen in high energy particles. The facility established, was funded by DST-Nanomission. The study has important consequences for not just basic physics but also applications to spintronics, memory devices, dissipationless electronics and quantum devices.

The objective of current research work published in Nature Communications was to make transport measurements on two-dimensional electron gas at the interface of two insulating oxides. The novel idea was to exploit the internally generated electric field normal to the interface to create a spin-orbit interaction of the electron – an off-shoot of relativistic quantum mechanics. A consequence of this interaction is the occurrence of what is called the Rashba-splitting of the electronic bands.

This is the first observation of strong Rashba effect where the spin of the electron locked with its direction of motion in an oxide interface. This finding has significant implications in the field of spin-electronics and quantum devices since this oxide superstructures could be integrated with relevant materials to achieve new or integrated physical properties.

Another related and interesting system that Dr. Chakraverty’s group have embarked on is the ultra-clean interface of EuO-KTaO3. In this material, an external magnetic field was applied to generate Landau Diamagnetism, and the consequent Shubnikov-deHaas oscillations with presence of non-trivial Berry’s phase has been observed. The resultant manuscript is under submission for journal publication.

Realization of large Rashba-effect at oxide interface by the INST team may open up a new field of device physics, especially in the field of new spin-electronics devices, dissipationless electronics and quantum devices applicable for next-generation data storage media and quantum computers.