More than 40 percent of Kumaun Himalaya is susceptible to permanent displacement in case of earthquake of magnitude ranging from 7 to 8.6 Mw, says a new study. 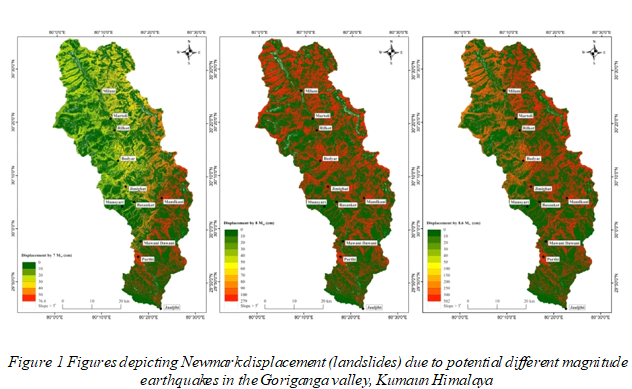 A team of Scientists including Sandeep Kumar, Vikram Gupta, Parveen Kumar & Y. P. Sundriyal from the Wadia Institute of Himalayan Geology, Dehardun, an autonomous institute under the Department of Science and Technology, Govt of India, carried out a probabilistic assessment of co-seismic landslides for the Goriganga valley located in the Kumaun Himalaya as it lies in the highest seismically active zone of the seismic zoning map of India. They estimated the Newmark permanent displacement, which provides the distribution of predicted slope failure in the area.

It was found that more than one-third of the area was vulnerable to the co-seismic landslide and that earthquakes of magnitudes 7.0, 8.0, and 8.6 (Mw) might moderately damage the area of about 1459 km2, 1256 km2, and 1134 km2 in the study region, respectively. This research has been published in the ‘Bulletin of Engineering Geology and the Environment’ recently.

This work is the first of its kind in the Himalayas region, in which earthquake-induced landslides have been explored in view of future major to great probabilistic earthquakes.