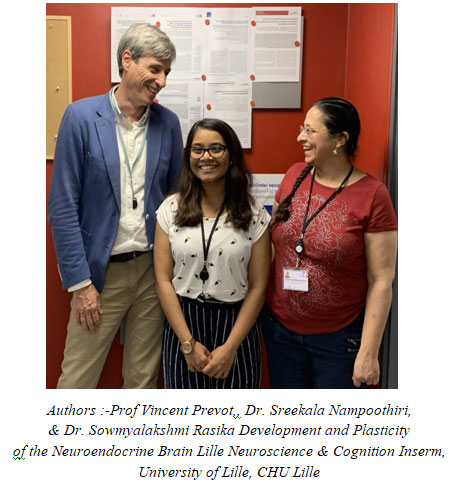 Scientists have zeroed in on the route in which the SARS-CoV-2 virus makes its way to the brain. Neurons located in the nose that help us sense smell as well as hypothalamus, the small region located at the base the brain, could provide the port of entry for the virus into the brain, says a new study.

The study could provide a new understanding to tackle the COVID 19 patients and control the pandemic, which has caused crisis of unprecedented dimensions affecting every continent of the globe.

Dr. Vincent Prevot, previously a principal investigator supported by the Indo-French Centre for the Promotion of Advanced Research (CEFIPRA), supported by the Department of Science & Technology, Govt. of India along with a team of Indian and French scientists, have shown that specialized glial cell called tanycytes in the hypothalamus, as well as olfactory neurons, could provide an opening for SARS-CoV-2 into the brain. They have also shown that hypothalamic circuits could act as a hub for the numerous risk factors as well as the physiological effects of viral infection. This work has been published in the journal ‘bioRxiv’.

While COVID-19 has been considered a respiratory disease, many of the reported symptoms could also have a neurological origin. However, most investigations so far have not found the virus in the brain, or have found it only in the cerebrospinal fluid or blood vessels.

Similarly, the only confirmed molecule that the virus binds to on the host cell surface in order to enter the cell – angiotensin-converting enzyme 2 or ACE2, a molecule that regulates blood pressure, has not been shown to be present at high levels in the brain, other than in capillary walls.

However, the researchers were struck by a curious coincidence. Many of the functions affected in severe COVID-19 patients – temperature control, hydration, cardiorespiratory function, the senses of smell and taste were coordinated or transmitted by the hypothalamus. Besides, many of the risk factors for severe COVID-19, including male sex, metabolic diseases such as obesity, diabetes or hypertension, and even old age, also involve hypothalamic cell networks.

With the aid of funding from the European Research Council Synergy grant, the team stumbled upon multiple findings. Their bioinformatician and postdoctoral fellow Dr. Sreekala Nampoothiri found that both the hypothalamus and related regions involved in cardiorespiratory function, smell, or taste expressed the viral receptor ACE2 and the most commonly used protease, transmembrane proteinase, serine 2 (TMPRSS2). The hypothalamus and connected regions could thus indeed be infected by the virus, with ACE2- or TMPRSS2-correlated genes playing important roles in the perception of smell, taste, or the hypothalamic regulation of multiple bodily functions.

Florent Sauve, a French Ph.D. student and other members of the laboratory, found that ACE2, albeit at low levels, and TMPRSS2 were present in tanycytes in a part of the hypothalamus bordered by fenestrated blood vessels. Just as importantly, other cell types, including sensory neurons of the nose, which perceive smell, and their fibers entering the olfactory bulbs of the brain also expressed ACE2 and TMPRSS2. Thus not only could the virus directly affect the sense of smell by infecting these neurons but could also find its way to other brain regions, including the hypothalamus with its other crucial functions, bypassing from neuron to neuron along olfactory pathways.

The team also showed a correlation between known risk factors for severe COVID-19, such as sex or metabolic diseases, and the susceptibility of the hypothalamus to infection. The research team hopes that their finding will aid future studies to reveal exactly what cellular and molecular pathways are triggered by viral infection and whether they can be targeted to improve the outcome of severely ill patients.