Metal air batteries are a promising technology in today’s sustainable society. The efficiency of such batteries, particularly, Zinc-air batteries, are immensely dependent on the material used in the cathode. Binary metals are essential for achieving bifunctionality in electrocatalysts to be further rendered as cathode materials in rechargeable Zinc-air batteries.

The major hindrance in these battery materials lies in the fact that the active metal centers are more likely to etch out if it is not properly bound to the substrate. This leads to an uncertainty in the actual metal-active units, which have a great influence on the electrocatalytic performance and impede the catalysts from real-time application point of view.

Scientists from the Indian Institute of Nano Science and Technology, Mohali, an autonomous institute of the Department of Science and Technology (DST), have developed an efficient bifunctional electrocatalyst with sufficient activity-specific metal units, which would display impressive oxygen electrocatalysis performance. This material could be further used as a cathode catalyst impacting high power in both liquid and solid-state rechargeable Zinc-air batteries.

The researchers have developed an innovative synthesis strategy by choosing an organic metal complex called bis-terpyridine as an organic linker to form a hexa-coordinated bimetallic complex. In this way, they have ascertained the metal content in the active system, which is then carbonized to obtain better conductivity and an all-planar structure of the final metal or nitrogen co-doped nanocarbon material Fe, Co, N-C with isolated Fe-N4 and Co-N4 active sites. This helped in the improved oxygen electrocatalysis performance.

In the catalyst Fe, Co, N-C, the presence of electronegative N-dopants coordinated to metals (FeN4 and CoN4) induced a change in the orbital orientation of the metals and elevated the catalytic performance with a lower potential difference for both oxygen reduction reaction (ORR) and oxygen evolution reaction (OER). As a result, the oxygen catalysis performance of the catalyst stands out better than most of the relevant electrocatalysts in the field of Zinc-air batteries. The synthesis method, electrocatalysis and the corresponding battery performance of this material has been published in the journal ACS Nano. 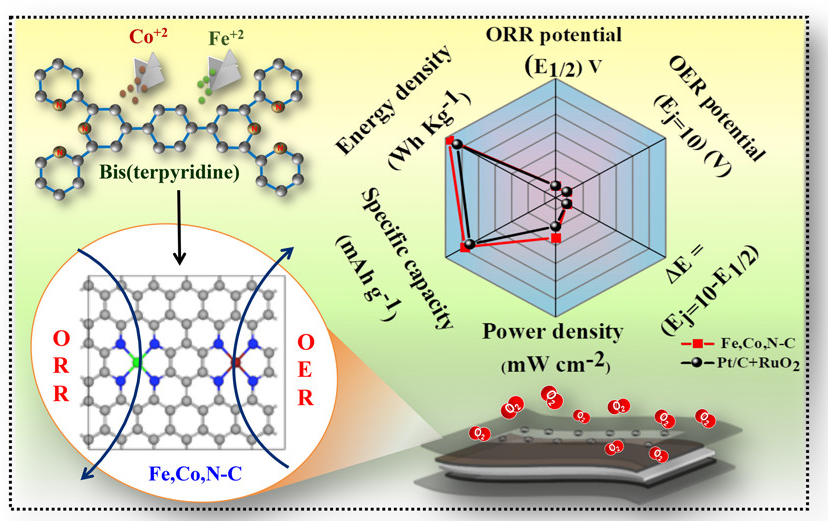 The synthesis process developed by the scientists can help design electrocatalysts for any sustainable energy applications like water electrolysis (HER/OER) that require by-functionality by tuning the choice of metals.