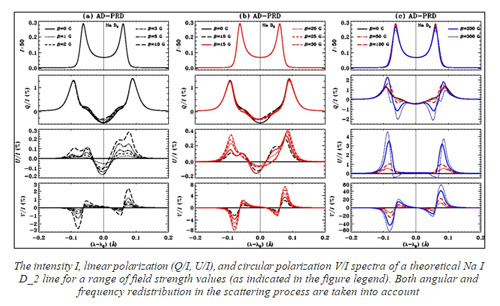 Scientists at the Indian Institute of Astrophysics (IIA), Bengaluru, an autonomous institute of the Department of Science & Technology, Government of India, have developed an efficient numerical code to probe into the physical conditions that prevail in the Sun and the stars and the mysteries behind them.

Just like the Earth, the Sun and the stars have atmospheres of their own. The Sun’s upper atmosphere sizzles at a temperature several times higher than the roaring inferno down below, the reason behind this is still being explored. There are many such mysteries that lurk behind the atmospheres of the stellar bodies far away. Important clues to these mysteries lie in the magnetic fields harbored by the solar and stellar atmospheres that give rise to polarized light. These clues are carried down to the earth along with the spectrum that is received from the sun and the stars. However, probing them has been a challenge because of the complexity of the problem and also lack of efficient codes to demystify the footprints of the magnetic fields from the observed spectrum.

A group of scientists led by Dr. M. Sampoorna from IIA have developed an efficient numerical code that can demystify these magnetic fields by using polarization data from the solar and stellar spectra by including complex scattering theories in magnetic fields.

Besides, magnetic fields in the solar and stellar atmospheres give rise to polarized light through Zeeman, Hanle, and Paschen-Back effects depending on the strength of the magnetic field. These different effects leave their fingerprints in the polarized spectrum. Determining the magnetic field topology is essential to resolve outstanding problems in solar physics, such as solar coronal heating. A physical model to describe the generation and transfer of the polarized radiation in stellar atmospheres is provided by the theory of polarized radiative transfer.

The scientists have developed the code based on this theory and applied this code to explore the signatures of the magnetic field in the incomplete Paschen-Back effect regime of field strength and of angular and frequency redistribution in the scattering process.

The code is unique for the fact that it includes computationally expensive angular and frequency correlations in scattering processes, compared to others, which include only frequency redistribution, which is relatively simpler in terms of computing needs.

The group showed that in the case of specific magnetic fields, both angular and frequency correlations are necessary in the redistribution as they have a significant effect on the polarized line profiles. Both are necessary for field strengths below about 30 Gauss and can be ignored for the case of zero Gauss field and those larger than 30 Gauss. The result shows that computationally simpler frequency correlations can be used in the analysis of the observed polarized spectrum for zero-field cases and fields above 30 Gauss.

Publication: "Importance of Angle-dependent Partial Frequency Redistribution in Hyperfine Structure Transitions Under Incomplete Paschen-Back Effect Regime" accepted for publication in The Astrophysical Journal on May 28th, 2020.