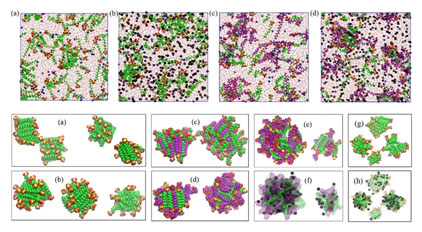 Natural gas is usually produced in places far away from the place of its consumption and has to be transported through pipelines constructed over long distances. Scientists have now found an efficient way to obviate the need for this cumbersome process, which involves liquefaction plants or long pipelines to carry gases across large distances.

Gas hydrates can conveniently store and transport natural gases in the form of solid hydrate pellets. Scientists from S N Bose National Centre for Basic Sciences (SNBNCBS), an autonomous institute under the Department of Science and Technology (DST), Government of India, have designed additive molecules which are mixed surfactants that would help in quickly forming such gas hydrates. Surfactants are molecules that spontaneously self-assemble with each other forming spherical aggregates called micelles.

The team of researchers, along with Dr. Rajnish Kumar, IIT Chennai, a collaborator in this study, have found that surfactant molecules like sodium dodecyl sulfate (SDS) when mixed with other co-surfactants, like cocamidopropyl betaine (CAPB), can increase the efficiency of methane uptake significantly. They have shown the direct molecular mechanism of which leads to enhanced methane uptake by the mixed surfactant systems resulting in the formation of methane hydrates. This work has been published recently in the ‘Journal of Molecular Liquids’.

According to the team, the presence of CAPB led to much larger aggregates formed by the surfactants, and in the presence of methane in the system, these structures can absorb a large amount of methane in the hydrophobic interior. These additive molecules can go a long way to develop systems to reduce the necessity of long and costly gas pipelines for transportation of natural gas.