Scientists have spotted a new member belonging to the extremely rare group of young stars that exhibit episodic accretion. Such rare stars have gained significant interest in the star-formation community lately and this study could help probe into this group of stars and their formation mechanism in greater detail.

Episodically accreting young stars are young, low-mass stars that have not initiated hydrogen fusion in their core and are fuelled by gravitational contraction and deuterium fusion (pre-main-sequence phase of the star). These pre-main-sequence stars are surrounded by a disc from which it steadily feeds on the matter from the disc-shaped region of gas and dust surrounding the star to gain mass.  This process is known as mass accretion from the circumstellar disc of the star. On occasions their feeding rate increases. This is known as the periods of enhanced mass accretion from their circumstellar disc. During such episodes, the brightness of the star increases by 4-6 magnitudes in the optical bands. So far 25 such rare groups of stars have been discovered.

Indian astronomers from the Aryabhatta Research Institute of Observational Sciences (ARIES), an autonomous institute under the Department of Science & Technology, Government of India, as part of an international team, including groups within India from the Tata Institute of Fundamental Research (TIFR) and Indian Institute of Astrophysics (IIA), have discovered Gaia 20eae, the latest member of episodically accreting young stars.

On August 28, 2020, the Gaia Photometric Alert system– a sky survey which actively searches for the transient objects and publishes a daily report on the number of transients it detects, published a report stating that Gaia 20eae has brightened by 4.5 magnitudes. This indicated a likely case of enhanced episodic accretion.

The light curve of Gaia 20eae showed a transition stage when it exhibited most of its brightness at a short timescale of 34 days with a very rapid rising rate (3 mag/month). Gaia 20eae has now started to decay. The team has detected strong signatures of outflowing winds generated due to increased accretion and the presence of turbulence around Gaia 20eae.

In what has been a first-time discovery, the team detected a signature of magnetospheric accretion (red-shifted absorption) component from the high-resolution spectra (in Ca II IR triplet lines). This was consistent with the signature of low-velocity in-fall of matter from the inner part of the surrounding disc onto the central pre-main sequence star as viewed from a hotter background. The investigation of Gaia 20eae points towards magnetospheric accretion being the phenomenon for the current outburst. This is a first-time discovery because of the location of Gaia 20eae in the sky which enabled the team to view the low-velocity red−shifted absorption signature on top of the broad Ca II IR triplet emission line. 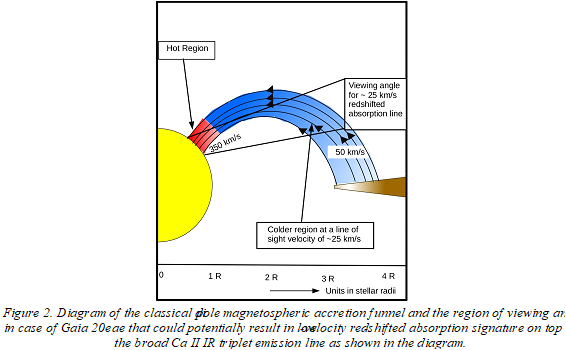 This research published in ‘The Astrophysical Journal’ provides an important test-bed to probe the various physical aspects of episodic accretion and their comparison with previously discovered sources.