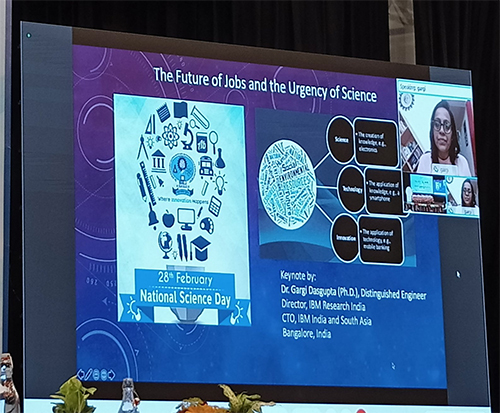 Director IBM Research India, and CTO, IBM India and South Asia, Dr. Gargi B Dasgupta, highlighted that the science and scientist community gave hope and light as the world was going through the pandemic last year, and it is the need of the hour to use S&T in every sphere to keep people safe, jobs safe and economy safe, at a special lecture on National Science Day (NSD).

National Science Day commemorating the discovery of the Raman Effect by Professor C V Raman was celebrated on February 28 on the theme ‘Future of STI: Impacts on Education, Skills and Work’. She spoke about the future of jobs and the urgency of science, highlighting the recent study by the World Economic Forum (WEF) on the new emerging job clusters and the skills required for tomorrow's economy. She said that the fourth industrial revolution is creating demand for new skill sets, displacing existing jobs as well as giving rise to new ones.

Speaking on the recent study by WEF, she talked about the new professions and five new job clusters that have been identified. These are – Data and Artificial Intelligence (AI), Engineering and Cloud, Product Development, People and Sales, and Marketing. She stressed that it was time to bring about changes in policies so that science (especially data science) will be pervasive and digital and human factors in demand. Discussing about the jobs that would stay for next ten years, she said data and artificial intelligence are fastest growing cluster and advocated for the need to include these sectors in schools, colleges, and university curricula.

She also said that scientists have broader role to play, and communities need to think scientifically. “Urgency of science is greater now than in the past, and we should accelerate our scientific processes. Science and technology can solve various problems, and we are in a position to make a difference by focusing on engaging with the scientific community to solve problems”, she pointed out.